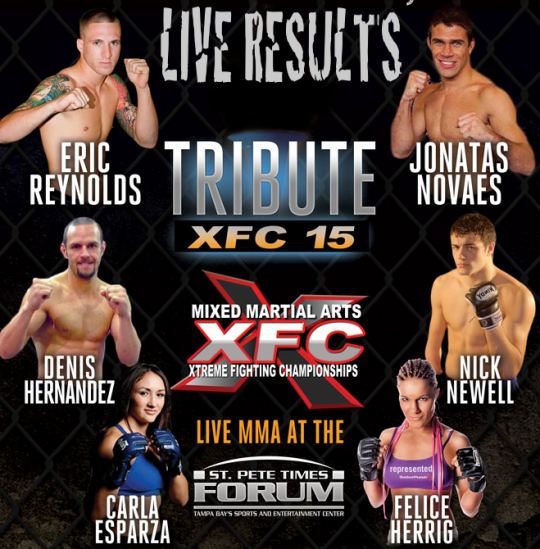 Lightweight prospects Eric Reynolds and Jonatas Novaes collide in the main event, while Carla Esparza and Felice “Lil’ Bulldog” Herrig face off in a 115-pound women’s bout in the co-main event.

ProMMAnow.com (www.prommanow.com) will provide LIVE results ant play-by-play commentary of all the action.

Press F5 on your keyboard to refresh the page as fight results will be updated in real time after each round.

Round 1 – Leg kick from Thomas, then a takedown. Kolosci gets back up but eats a knee on the way up. Thomas puts him right back down and pins him against the cage.. Kolosci trying to get up and Thomas goes for a guillotine, Kolosci defends and Thomas readjusts. Let’s go and lands a short uppercut while Kolosci is still on his knees. Kolosci goes for a leg. Elbow from Thomas, knees from Thomas to the body. Kolosci is back up, underhooks, pins Thomas to the cage, knee to the thigh, body shot. Thomas backs out throws a punch then puts Kolosci back down. Thomas does a good job controlling the action. Kolosci makes it to his feet but only briefly. Thomas scrambles, takes Kolosci’s back with less than a minute left in the round. Thomas throws on a reverse triangle, they roll and Kolosci taps out. Beautiful submission by Mr. Thomas.  Can’t even remember the last one of those I saw.

NOTES: Dave Batista talks with Michael Schiavello about his desire to compete in MMA.  Said the reason he left WWE was because he thought it would be easy to get a fight in MMA. Was hoping to fight for Strikeforce before they got bought by the UFC. Would still like to fight Bobby Lashley if the money was right. He owns a gym now and trains under a Cesar Gracie black belt. Said all he needs is an 8-week camp to prepare for Lashley. Said he trains every day now in MMA.

With both men weighing over 300 lbs. a piece, this super heavyweight bout brings more than 600 lbs. of MMA muscle into the cage.

Round 1 – Some big boys right here. Touch gloves. Leg kick Sayles. Front kick Sayles. Inside leg kick. Feints from Sayles. Jab. Big leg kick. Lee inside leg kick and a jab. Sayles connects with a shot and Lee counters and lands with a punch. Sayles stuns Lee with a couple shots abut Lee fires back and backs him up. Left jab from Sayles. Right, right left right. Left right from Lee. Two lefts from Sayles, low kick. Body shot from Sayles, jumping knee misses. Leg kick from Sayles, punch combo to the body and head. Lee fires back with a left hook. Sayles fires back, puts Lee on his back with a double leg, moves to full mount immediately. Sayles lands a jackhammer combination of punches and the referee steps in to save Lee from utter destruction. These boys have some big power.  It’s actually ruled a verbal submission. Guess Lee did not like 300+ pounds in full mount on top of him. Lee said afterward he wants a rematch. .. seriously?

Round 1 – Hill still has those little skinny legs. I never want to see those legs break again, please. Leg kick from Rader. Left from Rader. Hill backs Rader to the cage, they tie up. Hill looking for the takedown. He gets Rader on his back and is in top position in half guard. Body shots from Hill. Elbow from Hill, more short elbows. Rader trying to defend. Hill still on top working the elbows and ground and pound pinning Rader against the cage. Rader getting some lumps on his head, just over two minutes to go. Knee to the body from Hill. He’s dominating and controlling the action so far. Rader scrambles, Hill locks on a D’arce, locks it tight and Rader taps out. Complete domination by Corey Hill! Will we ever see Hill back in the UFC? He has a long term contract with the XFC right now.

Round 1 – Nasty stare down. Hernandez looks mean. Newell lands some nice right hands, goes for a double leg. puts Hernandez on his back. Newell inside full guard. Lans a left and a right. Hernandez fires back from off the bottom. Newell drops some nice shots. Newell drops back for a heel hook and Hernandez is done and taps out. Wow! Very impressive. By the way, Nick Newell doesn’t have a left hand and a little over only half an arm.

Round 1 – Esparza shoots, immediately gets Herrig down. Felice gets right up but then gets put right back down. Carla inside full closed guard. Elbow from Carla. Herris shrimping. They are scooting all over the cage, pits her against the cage. Herrig trying to get to her feet, she makes it up. Knee from Herrig, Carla with a knee. They trade knees to the body. Knee from Herrig to the body but Carla puts her right back down and staying very aggressive on top of her. Herrig makes it to her feet. Carla shoots, Herrig sprawls. Carla drives and drives. She stands and grabs a headlock and flips Herrig over to the ground, she’s landing some right hands on Herrig’s head. They scramble and Carla ends up on top in half guard. Carla is landing lots of punches from top position, doing lots of damage. She goes for an armbar with less than 10 seconds left in the round. Time runs out. Herrig has a MASSIVE hemotoma. PMN scores the round 10-8 for Carla Esparza.

Round 2 – Front kick from Carla. They tie up and jockey for position against the cage. Carla tries to drag her to the ground but ends up on bottom. Carla reverses and ends up on top inside full guard. Carla working the ground and pound with punches and hammerfists. Herrig using a pretty effective guard and locking up her arms pretty good to prevent damage. Nice elbow from Esparza. Herrig throws her leg into a gogoplata position but doesn’t pull the head down. She does get mission control, Esparza picks her up and slams her. Carla tries to pass the guard but Herrig doing good preventing it. The ref stands them up. They tie up, Herrig prevents the takedown. Carla puts her back down and ends the round on top. PMN scores the round 10-9 for Esparza.

Round 3 – Carla shoots, gets the takedown, inside Herrig’s full closed guard. Ref calls for action. Herrig goes for an armbar but Esparza escapes and puts Herrig in a crucifix and starts landing several punches.  Herrig scrambles to try to escape and gets out of the crucifix but Esparza has side control and is landing punches. Herrig locks on a reverse triangle. Esparza escapes and they scramble. Herrig talking to her corner. Knees to the body from Esparza. Herrig recovers full closed guard. Elbows and punches from the top from Esparza. Ref stands them up. Thirty seconds to go. Right hand from Herrig. Esparza lands a counter right. Front kick to the face from Herrig, they tie up. PMN scores the round 10-9 for Esparza and the fight 30-26 for Esparza.

Round 1 – Novaes shoots, pushes Reynolds to the cage. Gets the trip takedown, on top in half guard. Novaes taking his time from the top, transitions smoothly to full mount. Reynolds escapes to his feet. Novaes gets him back down, gets full mount, they scramble and Novaes goes for an armbar. Reynolds gets out but Novaes back in full mount landing punches from the top. Reynolds bucks out and Novaels locks up an armbar. He cranks it hard, looks nasty. Reynolds escapes to his feet and is landing shots from top position. Reynolds stands up and out, ref lets Novaes up. Reynolds swings big, Novaes shoots under and that’s time. PMN scores the round 10-9 for Novaes.

Round 3 – Leg kick from Reynolds. Novaes shoots, stuffed. Leg kick from Reynolds. Left hook from Novaes. Left from Reynolds. he stuffs a shot and ends up on top of Novaes landing shots. He backs out and the ref lets Novaes up. He shoots, stuffed. Kick to the arm from Novaes. Sloppy shot from Novaes and he flops to his back. Reynolds lays on top and drops some elbows and punches to the body and face. Reynolds stands up, kicks Novaes’ body, and lays back on him, lands a right, then stands up. Ref lets Novaes up. He throws a lazy right, looks exhausted. Novaes flops to his back  Ref lets him up. He shoots again, stuffed, flops to his back again. Ref lets him up again. Novaes shoots, Reynolds sprawls. Nice left from Reynolds. Finally Novaes gets the takedown and is on top in half guard. Novaes locks on an arm triangle but Reynolds escapes to his feet, slips to the ground on a kick and this fight is over.