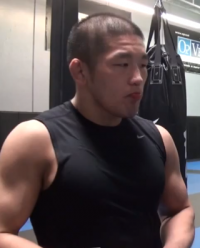 MMA reporter extraordinaire Aaron Tru caught up with the Japanese fighter at Reign Training Center in Southern California this week to talk about the fight.

Without an interpreter the language barrier made it difficult, but a few things are evident: Ishii has been concentrating heavily on his striking, he will be ready for Fedor at DREAM and his ultimate goal is to become UFC champion one day and feels this fight is a very important step toward that goal (Yes, Ishii wants to use Fedor as a stepping stone).