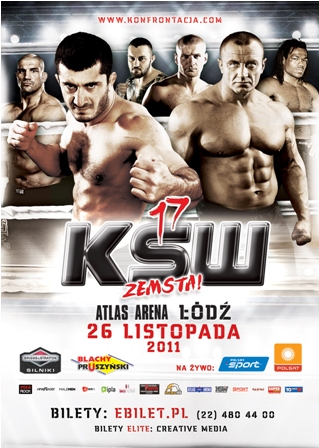 In the first of the two co-headlining fights the World’s Strongest Man Mariusz Pudzianowski will face Englishman James Thompson in the anticipated rematch. They both met at KSW16 inMay, when theBristolbased fighter earned a submission victory. This time “Pudzian” promises that the outcome will be much different. The fight has been signed for the one hundred twenty five kilograms catchweight.

The best Polish MMA fighter Mamed Khalidov will be the second featured star of the show. The Chechen born knockout artist and submission wizard will face Brazilian MMA legend Paulo Filho in the middleweight showdown. Fighting out ofOlsztyn,Poland, Khalidov will have his hands full against the famous Pride veteran.

The 33-year-old BJJ and Judo black belt fought for the best organizations in the world amassing an impressive MMA record of twenty-two wins, four losses and two draws. He was also ranked world number one at eighty-four kilograms in the past. Battling his personal demons, Filho collected himself to challenge the Pole on his home turf.

The second in the series of rematches will feature Rameau Thierry Sokoudjou (Cameroon) defending his KSW light heavyweight world title against Jan Blachowicz. The Cieszyn born fighter lost the first clash due injury and really wants to avenge the painful loss – This fight won’t resemble our first encounter. I’ll do everything in my power not to let my fans down and have my hand raised – Blachowicz promises. The KSW standout prepared for this fight in Hollandtraining with one of the best fighters in the world Gegard Mousasi.

The November’s show will also see the undisputed number one lightweight in Poland Maciej Jewtuszko’s KSW debut. The popular “Irokez” will square off against fellow Pole Artur Sowinski – The fans will see a pink trunked guy smashing another dude – Jewtuszko boldly predicts.

One of the best grapplers in Europe Michal Materla will compete in KSW for the third time this year on theLodz’s show. Berserkers Team fighter will have his toughest career test to date against former IFL champion Matt Horwich.

In the third “revenge” bout Antoni Chmielewski will try prove his superiority to James Zikic (England). To this day “Chmielu” cannot agree with the judges verdict in the first fight in March and that is why he pursued the rematch. The second fight against Zikic will be his return from a severe knee injury.