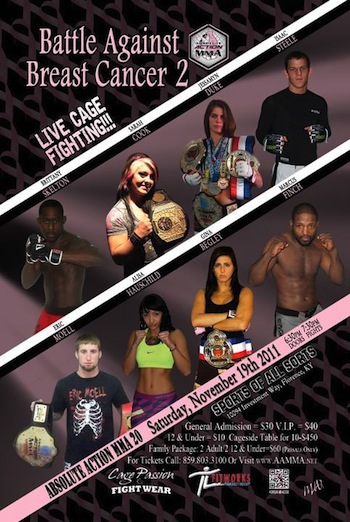 Touted as their biggest show to date, Absolute Action MMA returns to Sports of All Sorts in Florence, Kentucky, for its second annual Battle Against Breast Cancer.

Last year AAMMA was able to put on the very first all female event in the state of Kentucky.

This year four women’s fights take place, one that has major implications in the national WMMA amateur rankings.

Duke is currently ranked 6th in most ranking systems while Bell comes in at the number 4 spot. Both fighters are 4-1 and a win propels them up the ladder.

Three professional fights are on tap as well as three amateur title fights.

Professional Issac Steele representing Team Jorge Gurgel is matched up against Yancy Martin in what could be a fight of the night affair.

Rob Nickerson of Reaction MMA in Lexington is back in action as well as Marcus Finch. AAMMA Light Heavyweight champ Matt Bell takes on his toughest opponent in Josh Walker.

Walker is currently the Hard Rock MMA Light Heavyweight title holder and looks to add another belt to his collection.

This event is available through Internet pay-per-view on http://www.aamma.net/ with a $3 from every buy going to the Mighty Mia Hayes fund.  Here is a look at the fight card as it stands now, subject to change.