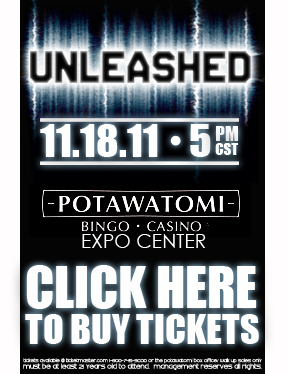 Sergio Pettis has certainly earned his nickname. The younger brother of UFC lightweight title contender Anthony “Showtime” Pettis, “The Phenom” recently made his pro MMA debut with a brilliant head-kick KO. A name that fans will definitely want to remember, he’s going to be knocking on the door of some big-time opponents in the very near future.

Brazilian Jiu-Jitsu Black Belt Joao Zeferino is a 2008 BJJ World Champion. A highly-decorated submission wizard, Zeferino has won five of his last six fights, and will step back into the cage for the first time in two years. His opponent, Sean Salmon (18-17), who is a Milwaukee native, is hoping to make his hometown proud. He’s hit a rough patch in his career recently, but will look to get back on track against his super-talented opponent. Salmon’s stint in the UFC included losses to two top contenders, former light heavyweight champion Rashad Evans and middleweight contender Alan Belcher. In his 18 career victories, Salmon has finished his opponents with 6 T/KOs and 7 submissions. He possesses strong wrestling, and is always a threat to finish a fight.

With these captivating bouts headlining Wisconsin’s most talent-filled pro MMA card in history, NAFC’s “Unleashed” is sure to excite local fight fans!

The full fight card for “Unleashed” as it stands now includes: