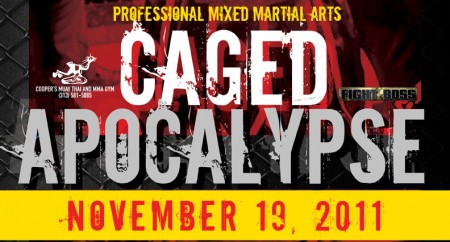 OPEN TO THE PUBLIC

The official weigh-in for Saturday, November 19’s “Caged Apocalypse” professional mixed martial arts event presented by Donofrio MMA and Impact Fight League (in association with Palace Sports & Entertainment) at The Palace of Auburn Hills in Auburn Hills, Michigan, will be held on Friday, November 18 at the Crowne Plaza Hotel in Auburn Hills at 6:00 pm.

All fighters and event promoter Joseph Donofrio will be available for interviews, autographs and photo opportunities.

The entire card has been finalized for this Saturday, November 19’s “Caged Apocalypse” professional mixed martial arts event presented by Donofrio MMA and Impact Fight League, in association with Palace Sports & Entertainment, at The Palace of Auburn Hills in Auburn Hills, Michigan.

In support of the five-round main event between Impact Fight League Middleweight Champion Brendan “The Caucasian Devastation” Seguin and Colorado Springs, Colorado’s Justin Guthrie (13-4) will be 10 other bouts including the long-awaited pro debut of Traverse City, Michigan’s popular Shaun Mirjavadi and the return after a two-year layoff due to shoulder surgery of Casco, Michigan’s Richie Lictawa.

“Every one of these fights stands on its own as a tremendous match-up,” said event promoter, Joseph Donofrio of Donofrio MMA. “There isn’t one fight Saturday night that doesn’t have the potential to be the fight of the night. I’m very excited to be bringing an event of this quality to the Palace.”

As is the Donofrio trademark, outstanding production will create an electric atmosphere and keep fans on the edge of their seats, including “Vegas” style ring entrances, state-of-the-art pyrotechnics, the most beautiful ring girls, and the world’s best MMA ring announcer, Phil “The Voice” Davey.

Tickets for Caged Apocalypse are available at Palacenet.com, The Palace box office, and all TicketMaster outlets, or by phone at 1-800-745-3000. The action starts at 7:00 PM, with doors opening at 6 PM. Special VIP Cageside Tables are available by calling 248.770.6000.