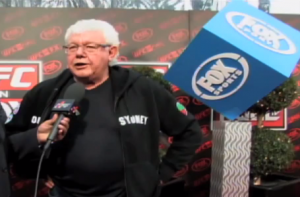 Reporter Mike Straka caught up with FOX Sports chairman David Hill over the weekend on the red carpet at the UFC on FOX event in Anaheim, Calif. Hill explained why FOX finally decided to get into the UFC/MMA business and why he ultimately had to admit he was wrong about his initial impressions of the sport.

Hill said the revelation came when he realized what boxing was to his generation, MMA is to today’s generation. He also talked about what a great job the UFC has done with their television presentation up to this point and why if it’s not broke, there’s no need to fix it. The next UFC on FOX event is planned for January and will run 2 1/2 hours.