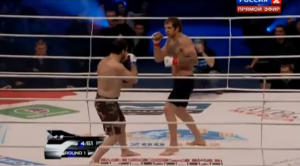 The Emelianenko brothers have had a rough go as of late. Aleksander Emelianenko (17-5), brother of the legendary Fedor, returned to action Saturday for the first time in almost a year as he took on the much less experienced Magomed Malikov (4-1) in the M-1 Challenge 28 main event at the Star Centre in Astrakhan, Russia.

Although Malikov only began fighting professionally in January of this year, he took the fight on just a couple days notice against a fighter not long ago considered one of the top 10 heavyweights in the world.

As you will see in the following video, Emelianenko throws a left jab and is countered with a big overhand right that immediately drops him to the canvas and into the ropes. Malikov follows up with two more big rights and the referee is forced to step in to save Emelianenko who went limp. Official fight time — 23 seconds.

It is a huge win for any fighter, but especially for Malikov who is so young in his career. Malikov is slated to participate in M-1’s upcoming heavyweight grand prix which kicks off at next week’s M-1 Challenge 29 on Nov. 19.

It is Aleksander Emelianenko’s second straight loss. He was stopped by Peter Graham via TKO due to leg kicks last December. And his brother Fedor has lost three straight, the last two via TKO. So, what do you think fight fans? Is Aleks and Fedor past their primes, just in a slump, or do they need to make some significant changes to their training camps?