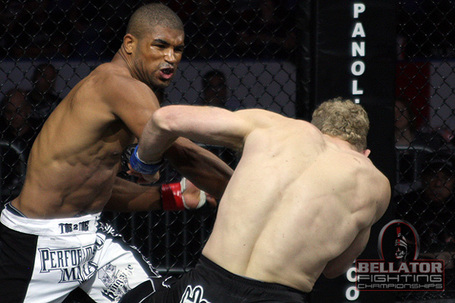 Bellator continues to roll on. This Saturday night, Bellator 54 goes down in Atlantic City. The card features the semifinals of the promotion’s middleweight tournament, as well as bantamweight champion Zach Makovsky in non-title action. You can check out the main card live on MTV2 and Epix. Also, don’t forget to check out the SpikeTV.com undercard, which features the likes of Daniel Gracie, Karl Amoussou and Tim Carpenter.

Bryan Baker vs. Vitor Vianna
When Baker has a wrestling advantage, his path to victory is pretty clear. He can do enough to survive on the feet, and he can drop bombs from the top position. Vianna has begun to develop ground game, but he is still mostly a striker. Bellator can then look forward to rematch between Baker and Shlemenko for a shot at champion and training nightmare Hector Lombard.
Pick = Bryan Baker
Film Study: Bryan Baker vs. Rory Singer (MFC 20)

Zach Makovsky vs. Ryan Roberts
Normally when people think about wrestlers in MMA, they picture a big burly guy getting takedowns and holding his opponent on the ground. Makovsky is a little bit different. He did decision his way through the first Bellator bantamweight tournament, but he does it will a continual takedown attack. Look for “Fun Size” to plant Roberts on his back over and over. Maybe after the fight, Roberts will stop asking his opponents if they are ready.
Pick = Zach Makovsky
Film Study: Zach Makovsky vs. John Louro (Grappling Style)

Jacob Kirwan vs. Renê Nazare
Both Kirwan brothers come to fight. They will accept fights anywhere against anyone. In a lot of ways this is a set up fight for Nazare. He is a solid grappler, and has previously tapped strong wrestlers in the past. With that being said, Kirwan could prove to be a much tougher test than anyone previously thought.
Pick = Rene Nazare
Film Study: Rene Nazare vs. Kelvin Hackney (Bellator 45)