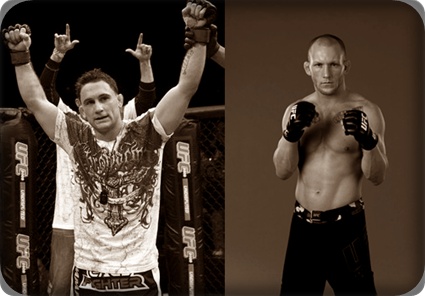 The UFC 136 main event between Frankie Edgar and Gray Maynard is a highly anticipated fight that will take place this weekend in Houston, Texas. It’s actually the third fight between the two fighters with Maynard winning the first fight and the second fight ending in a draw at UFC 125. Edgar will be looking to defend his UFC lightweight title with Maynard looking to prove that he is the best lightweight fighter in the world. Let’s see how this one shakes out.

Gray Maynard comes into this fight with a career record of (10-0-1, 1 NC) with 2 wins via TKO/KO and 8 decision wins to his credit. Maynard was last seen in action at UFC 125 where he dominated the first round against Frankie Edgar, only to allow Edgar to survive and come back to earn a draw in what was a classic war by many. Maynard is a dominant wrestler with good power in his hands, a granite chin, and good cardio. If there’s a knock on Maynard it’s that he wins by decision most of the time and many don’t consider him an exciting fighter. However, he seems to be more comfortable with his striking in his past few fights so that could be changing.

Frankie Edgar comes into this fight with a career record of (13-1-1) with 2 wins via TKO and 3 wins via submission. Edgar was last seen at UFC 125 surviving the incredible onslaught from Maynard to rebound and win enough rounds to make the judges score the bout a draw. Edgar is a good technical fighter with his strikes, but he has a background in wrestling while being versed in submissions. He has a granite chin as well as huge gas tank that allows him to fight at an incredible pace.

I can see why Edgar is the favorite, but I don’t think Maynard should be the underdog either. I think many people are giving a huge amount of credit to Edgar for being able to survive the first round in the last fight and rightfully so. Maynard expending all that energy trying to finish him is probably what allowed Edgar to comeback in that fight as the fight wore on. I think Maynard has learned a lesson from that fight and will pick his moments to explode so Edgar won’t be able to capitalize on a tired Edgar as he has the slightly better gas tank.

Maynard will need to set up his takedowns with his striking. He should not be headhunting in this fight as Edgar is the more technical striker and will be able to counter anything in which Maynard overcommits to. Maynard needs to use his size and wrestling to take Edgar down and punish him from the top position. That would nullify Edgar’s biggest advantages in his speed and ability to put combinations together on the feet(striking).

Edgar will need to use his superior footwork and speed to create angles to counterpunch as well as defend Maynard’s takedown attempts. Now it’s possible that Edgar could take Maynard down and that would certainly put Maynard in an unfavorable position as he would offer virtually no threat to submit Edgar off his back. However, I think Maynard being dog tired is what allowed Edgar to have the success he had with takedowns in the last fight. So I’m not sure he would be able to take Maynard down and keep him down unless it was later in the fight.

Ultimately, this is a pick’em fight and both fighters have improved a ton since they first fought and I’m sure both have improved since their second fight back in January. This fight will come down to who was able to make the best adjustments to one another’s style since last time out. I think Maynard has more ways to win this fight in that he could possibly hurt Edgar standing and finish him off via TKO, or is certainly capable of grinding out a decision by using his size and wrestling. I think Edgar’s only realistic way of winning is to defend the takedown and outstrike Maynard on the feet. He’s certainly capable of that, but can he defend the takedowns of a Maynard who hasn’t shot his wad in the first round? I think the percentages of Maynard grinding out a decision with his wrestling are a bit higher than Edgar defending all the takedowns and outstriking Maynard the entire fight.

I going with Maynard via decision. Size and wrestling matter.