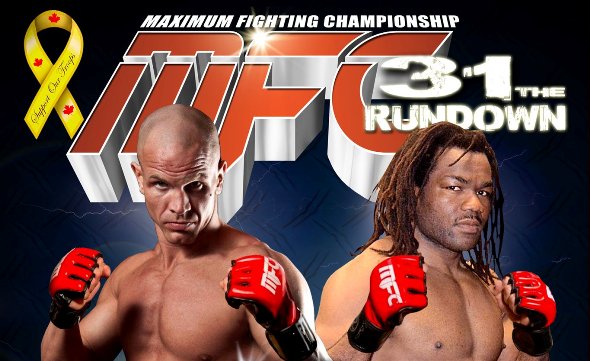 MFC 31 goes down Friday night at the Mayfield Inn Trade and Conference Centre in Edmonton, Alberta. As always, you can watch the main card live on HDNet. The card lost a little flavor when the Antonio McKee vs. Brian Cobb was moved. However, there is still a strong main event and the main card is filled with prospects.

Ryan Jimmo vs. Rameau Thierry Sokoudjou
It probably is not MFC Preisdent Mark Pavelich’s intention, but he is doing a wonderful job molding the career of Jimmo. By the time he gets a shot in the UFC, he will be ready, which is becoming more and more rare in the MMA world. This fight against Sokoudjou will go a long way in determining where Jimmo stands as a prospect. Sokoudjou is clearly not the world beater everyone thought he was when he bested Antonio Rogerio Nogueira and Ricardo Arona in back-to-back bouts. However, he is still a solid light heavyweight. On top of that, Sokoudjou is a good stylistic test for Jimmo. The Canadian Karate champion oddly does his best work in the clinch, and Sokoudjou’s judo background might make that difficult. Look for Jimmo to keep the fight on the feet and take a narrow decision with solid striking from the outside.
Pick = Ryan Jimmo
Film Study: Ryan Jimmo vs. Dwayne Lewis (MFC 28)

Dhiego Lima vs. Terry Martin
Lima seems to be following the same path as his brother. Douglas Lima blasted Martin in less than two minutes at MFC 29. The younger Lima should also be able to collect a win here. Martin is a solid wrestler, but his chin leaves something to be desired. On top of that, Lima is light years ahead of Martin on the ground. Is anyone else excited for the MFC press release when Lima signs with a new promotion?
Pick = Dhiego Lima
Film Study: Dhiego Lima vs. Bill Fraser (MFC 27)

Adam Lynn vs. Curtis Demarce
Demarce was on the MFC development tour. He fought UFC veterans in back-to-back fights, Richie Whitson and Marcus Davis. However, he dropped both bouts via split decision. In his last fight, he did enough to defeat Robert Washington and keep his status as a prospect. Lynn will be a good measuring stick. He has a 16-8 record and almost all of his losses have come against fighters with big show experience.
Pick = Curtis Demarce
Film Study: Curtis Demarce vs. Richie Whitson (MFC 28)

Richie Whitson vs. Kajan Johnson
For a while, Johnson was supposed to be the next big thing to come out of Canada. However, whenever he seemed close to the bigger show, he would drop a fight. Whitson has looked pretty sharp since the reality show and will probably pick up a victory here. If he uses the Team Quest style of clinching and wrestling, Johnson will have little recourse.
Pick = Richie Whitson
Film Study: Richie Whitson vs. Paul Bird (TUF 9)