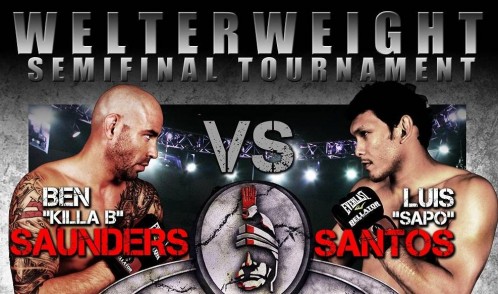 Ben Saunders vs. Luis Santos
Santos’ victory in the first round over Dan Hornbuckle really was a feel good story (unless you are Hornbuckle). This is a guy who has been fighting on the local circuit in Brazil since 2000, so it was nice to see him tke a step up and succeed. However, it is hard to imagine that he was not on that local circuit for a reason. Look for Saunders to implement his normal clinch attack. He should also have more than enough game to survive on the round.
Pick = Ben Saunders
Film Study:

Chris Lozano vs. Douglas Lima
Lima probably had the easiest road to the second round of this tournament. He took every round over Steve Carl, but it would not be unfair to expect him to look better. Lozano seems to be improving every time he steps into the Bellator cage. One thing has remained the same, his power. Look for Lima to get the better of the striking on the feet, but Lozano always has a chance to crack an opponent and really get the ball rolling.
Pick = Douglas Lima
Film Study:

Ronnie Mann vs. Kenny Foster
Foster’s rugged and physical game proved effective until he ran into a serious grinder named Daniel Straus. In theory, he could push a smaller fighter into the cage and win with a bullying style. However, this will be a tough fight to showcase that kind of game. Mann is tough to deal with on the feet, and he has worked over a fair share of guys on the ground. He lost to the eventual champion of the last featherweight tournament, so he should be one of the favorites in the next bracket.
Pick = Ronnie Mann
Film Study:

Darryl Cobb vs. Giva Santana
What is Bellator doing here? It should not be a mystery. They have matched a guy with 14 submission victories against a guy coming off back-to-back submission losses. This should be a victory for “The Arm Collector.” Hopefully he can pick up a few more wins and earn a spot in the promotion’s next middleweight tournament.
Pick = Giva Santana
Film Study: