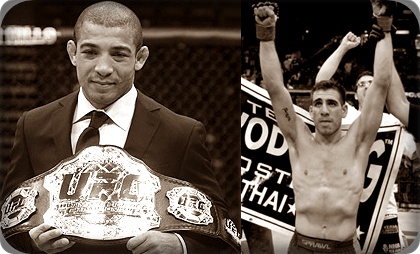 The UFC 136 co-main event will feature featherweight champion Jose Aldo defending his title against Kenny Florian in Houston, Texas. Florian was a two time title challenger as a lightweight and decided to drop down to featherweight in hopes of finally becoming a champion. This is the most important fight of Florian’s life as this will likely be his last title shot in the UFC. Let’s see how this one shakes out.

Kenny Florian comes into this fight with a career record of (15-5) with 3 wins via TKO/KO and 10 via submission. Florian was last seen in action at UFC 131 as he won a unanimous decision in his featherweight debut against Diego Nunes. Florian is known as a technical striker with a background in muay thai, and he’s also a blackbelt in Brazilian jiu-jitsu. Florian has always had problems with guys with powerful guys with good wrestling backgrounds.

Jose Aldo comes into this fight with a career record of (19-1) with 12 wins via TKO/KO and 1 technical submission to his credit. Aldo was last seen at UFC 129 defending his featherweight title against Mark Hominick. A fight that he dominated until the final round where he was content with winning via decision. Aldo is known as a muay thai striker is devastating leg kicks, agile on his feet, and excellent head movement. If there’s one question about Aldo’s game it may be his cardio since he seemed to fade in the Hominick fight. However, it was heavily rumored that he was sick heading into that fight which is sensible since that’s the only fight in which he seemed to tire.

I agree with those odds as stylistically this fight is similar to the Hominick fight for Aldo. Aldo will be the quicker more powerful fighter in this matchup and it’ll be very difficult for Florian to implement his game. I don’t think Florian is the level of striker that Hominick is and I doubt he has the wrestling game to take Aldo down unless Aldo gasses late in the fight. The real question is can Florian survive that long?

I detailed the head movement of Aldo after the Hominick fight here and it’s a thing of beauty. So if Florian isn’t able to use his hands to do damage against Aldo you’d think he would use his legs right? Wrong. Leg kicks would get Florian taken down, and Aldo actually has underrated ground and pound ability in my opinion. He did quite a bit of damage to Hominick on the ground, and Florian isn’t really a threat to submit anyone off of his back.

Florian does have one thing going for him in this fight and it’s that he will have a slight reach advantage. If you’ll click on the post where I talk about Aldo’s head movement, you’ll see that Aldo is comfortable standing in the pocket which means that he should be able to overcome the reach advantage of Florian.

I think Florian will try to outpoint Aldo and get it to the later rounds with hopes of Aldo tiring. He’ll probably try to establish the jab early as he did against Takanori Gomi and establish his range. I don’t think we’ll see many kicks from Florian unless he uses it to finish a combination. I think Aldo knows that Florian is weakest on his back and will look to take Florian down and work from there. He should be able to do damage and keep Florian from getting back to his feet with a low threat of submissions from Florian. If he keeps it standing, I expect those devastating leg kicks to play a huge role.

I like Aldo to finish Florian via TKO in this one, probably in the second round.