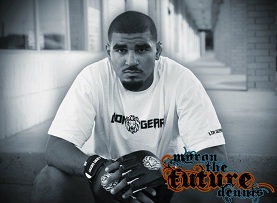 Myron “The Future” Dennis (6-0) will get his shot at the highest level of mixed martial arts on Oct. 8, as he makes his debut with Bellator Fighting Championships at Bellator 53 in Miami, Okla., against 205-pound contender Raphael Davis (10-2).

Fresh off of back-to-back TKO wins over Bryan Roberts and “The Ultimate Fighter 8” reality show participant Ryan Lopez, Dennis knows how big of an opportunity he has fighting for Bellator against a top-quality opponent.

“When my manager called me a told me I had the chance to fight for Bellator, I was speechless,” said Dennis, who trains out of the Academy of Martial Arts in Oklahoma City under head coach Kentrick Coleman. “I was actually with my wife and kids spending quality time with them, then everything just kind of came to a halt. All I could think was, ‘Well, back to work.’”

Dennis is taking the fight on short notice after defeating Roberts on Sept. 23, when he defended his Xtreme Fighting League light heavyweight title. Prior to that fight, Dennis mentioned his hopes of following the footsteps of former XFL alumni such as Jack Rosholt, Shane Roller, and Daniel Roberts, all of whom have fought in the UFC. Now he has his chance.

“I’m glad I didn’t get the chance to party like a rockstar last weekend after my win!” he joked. “Needless to say, I’m excited to fight Oct. 8th for Bellator in front of a national audience.”

Although the former collegiate football player has shown plenty of promise, Dennis has taken a patient approach to his MMA career, focusing on his training and preparation and letting everything else fall into place.

“I felt like sooner or later, if I kept hard at it and continued to win and earn my stripes, I would get more opportunities to fight for other promotions,” Dennis said. “I think that part of being on the radar has to do with the people you surround yourself with. I’ve been blessed to be able to fight and win the 205 title for the XFL, which is the biggest and best promotion in Oklahoma.”

For Dennis, a fight in Bellator is only the beginning. It isn’t a long-term deal or a guarantee of fame and fortune, so he still plans to go out against Davis and prove himself.

At the same time, ahead of the biggest fight of his career, Dennis isn’t worried about the additional pressure or expectations.

“I don’t feel pressure to fight anyone; this is my job and I love it,” he said. “I just look at every fight as another opportunity for me to reach my goals of reaching the top. I would love to fight for Bellator again in the future, and I plan on taking my game to the next level with a win over Rapheal.”

On paper, Davis represents Dennis’s toughest opponent to date, particularly on the ground. Dennis is no slouch on the mat, but he’s been particularly dominant on the feet. So is this a patented striker vs. grappler matchup? Not necessarily.

“Raphael looks like a very big and strong guy, and there’s no secret his grappling is top notch,” Dennis said. “It’s also no secret that I like to keep the fight standing to make the fight more exciting for the fans. I know he’s going to try and take me down. I’ve really been working my takedown defense for a long time now, so I feel confident in stuffing him. People underestimate my ground game, but that’s where I’ve ended most of my fights. I been competing in wrestling and Brazilian Jiu Jitsu tournaments for years now, so I’m no stranger to seeing good grapplers. Either way, I’m comfortable wherever the fight goes.”