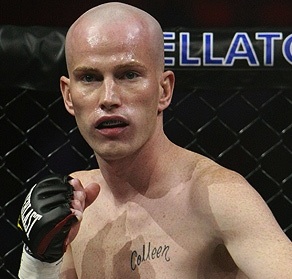 The first Locked In The Cage  event  was held in November 2009 at Alexandria Hall in East Falls, Pa. The turnout was decent – 2000  tickets  sold.  Since then, Evans has put on MMA events at the Philadelphia Armory and the Asylum Arena.

Evans’ influence is growing and Locked In The Cage is considered one of the East Coast’s leading fight promotions. Now fighters from Philadelphia’s premier MMA schools, including Fight Factory, Daddis Fight Camps, Revolution Academy, Maxercise and Fight Firm, are not the only ones on the card; events include MMA fighters from all across the country.

“Here in Philly, the  scene  is already really big. But the world don’t know it. I need to change that,” Evans says.

Evans, 26, did not just jump into the MMA business on a whim. He is a fighter himself, having his first boxing match when he was just eight years old. Over the years, he was able to build an impressive record as an amateur boxer with over 50 matches.

He even won the Outstanding Fighter Award at the 2003 Philadelphia Golden Gloves competition. Afterwards, he began his Muay Thai and Jiu-jitsu training.

Evans, who combined his MMA training with boxing and the wrestling skills he learned in high school, decided to concentrate on his efforts to become a highly respected MMA promoter. To do so, he had to give up fighting, which he did in 2009.

But that did not last long at all, since Evans stepped into the cage in October 2010 at Bellator Fighting Championships 33 in Philadelphia to make his pro debut. He fought and beat Lewis Cassner with a triangle armbar in the first round. As a professional fighter Evans holds a record 6-1-1.

Eventually, Evans wants to work his way up to the big leagues and promote sold out venues at large facilities, such as the Liacouras Center and the Wells Fargo Center where NBA and NHL games are held.

And to achieve his goal, Evans must put in the work and wear many hats to make sure a fight card is successful. Preparing for an event requires attention to detail, negotiating deals with trainers and managers, making hotel reservations for out-of-town fighters, setting up the weigh-ins, securing sponsors, matching up fighters, renting out space for the fight, insuring and paying fighters, selling tickets and much more.

To help him with the overwhelming amount of work, Evans hired Paul Miles, former editor of MidAtlanticMMA.tv and MMA blogger and commentator, as Locked In The Cage’s Director of Operations.

Miles’ responsibilities include managing the company’s day to day duties, handling contracts and developing contacts with new fighters from all over the country, and fight night operations.

Along with Philadelphia, Evans promotes fights in Delaware and Virginia, and he recently launched their Thursday Night Fights series at the Asylum Arena in South Philly. 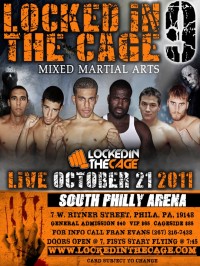