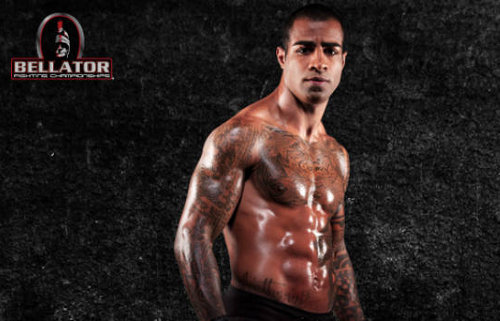 The amount of hate mail that I have received for bagging on the Bellator heavyweight tournament on the MMA Outsider Podcast, is a little excessive. Even though the heavyweight division is the least talented in the sport, this field is pretty interesting. The two biggest problems with this tournament are 1. the winner will not produce a challenger that will force champion Cole Konrad to evolve and 2. the promotion could use this card space to promotion a flyweight tournament.

With all that being said, how can you not be excited to watch the Fedor conqueror and the MMA debut of a high profile kickboxer? Bellator 52 takes place Saturday night at the L’Auberge du Lac Casino Resort in Lake Charles, La. The main card airs live on MTV2 and EPIX, while the undercard can be seen on SpikeTV.com.

Heavyweight Tournament
Neil Grove vs. Mike Hayes
During his tenure in Bellator, Grove has shown that he can dominate the lower levels of the heavyweight division. With that being said, he is still only an above average striker with a weak ground game. Grove has even been mounted by James McSweeney. Haynes mostly likes to stand and trade, so Grove should be a huge favorite. Hopefully Grove has been working on his ground game, because this year’s tournament field has a few fighter who can do some work on the floor.
Pick = Neil Grove
Film Study: Neil Grove vs. James Thompson (Cage Rage 22)

Blagoi Ivanov vs. Thiago Santos
This may not seem like it on the surface, but this really is a bizarre fight. Ivanov is know only because he beat Fedor Emelianenko in a combat sambo, and Santos competed three times for the no-rules promotion Rio Heroes. The “Big Monster” likes to come forward and throw wild punches before reaching for a clinch. Unluckily enough for him, that describes almost every combat sambo match in history. Look for Ivanov to get the better of the wild punching and own in the clinch position.
Pick = Blagoi Ivanov
Film Study: Blagoi Ivanov vs. Fedor Emelianenko (Combat Sambo)

Eric Prindle vs. Abe Wagner
If there was a casting call for another sequel of “Never Back Down,” Prindle would certainly be invited. Plus, he has come a long way since losing to Jimmy Ambriz by submission. Wagner biggest career victory was the result of mindless yet violence swinging. If he tries that strategy against Prindle, he will end up in trouble. “The American Soldier” is much bigger and hits with more power. A finish for Prindle is not out of the question either considering Travis Browne put Wagner to bed in only eight seconds.
Pick = Eric Prindle
Film Study: Abe Wagner vs. Tim Sylvia (Titan FC 16)

Mark Holata vs. Ron Sparks
This is probably the fight with the least star power on the main card. However, both Holata and Sparks have pretty interesting early career records. Sparks has victories over the cult-classic Johnathan Ivey and IFL veteran Vince Lucero. Holata holds a decision win over UFC veteran Carmelo Marrero, which proves that he can deal with a strong wrestler. Look for Holata to land the sharper punches on the feet and end up taking the fight.
Pick = Mark Holata
Listen to this: Mark Holata interview with The MMA Outsider Podcast

SpikeTV.com Undercard
Cosmo Alexandre vs. Josh Quayhagen
Normally Mann Talk does not spend a lot of time previewing bouts between 0-0 fighters. However, Alexandre is a high profile kickboxer making the transition to MMA under the Bellator banner. Between 2004-2011, he went 40-14-1 in kickboxing, but he has yet to make his MMA debut. In order to be considered a prospect, he needs to take care of business against Quayhagen. He is making his professional debut after building an 8-6 amateur record and going 0-2 in amateur title fights.
Pick = Cosmo Alexandre
Film Study: Cosmo Alexandre vs. John Wayne Parr (Kickboxing)

Bryan Goldsby vs. Genair da Silva
With one exception, Goldsby has lost to every high quality opponent he has faced. Of course, that one exception is Jeff Curran. Da Silva showed a strong brawling game against Marlon Sandro. If he can keep the fight on the feet, he should have very little trouble. With that being said, this will certainly be an action fight that fans do not want to miss.
Pick = Genair da Silva
Film Study: Bryan Goldsby vs. Jessie Riggleman (Respect is Earned 2)