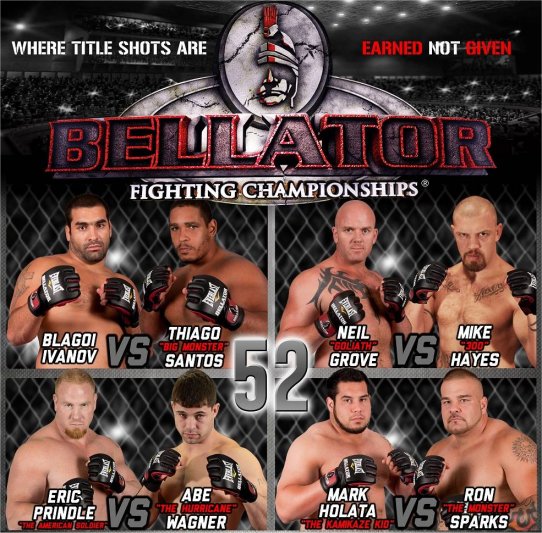 The heavyweights take center stage tonight at Bellator 52, as the Season 5 tournament gets underway with four quarterfinal bouts.

UFC veteran Neil Grove 11-3-1 MMA, 3-1 BFC, 0-1 UFC) will be looking to once again advance all the way to the finals as he did in Season 3. A victory there would give him another shot at Bellator heavyweight champion Cole Konrad, who defeated him in those same finals with a keylock submission.

Bellator 52 takes place at the L’Auberge du Lac Casino and Resort in Lake Charles, La., with the main televised card airing at 8:00 p.m. ET on MTV2.

ProMMAnow.com (www.prommanow.com) will provide LIVE results and play-by-play commentary throughout tonight’s event, from the opening bell until the final hand is raised in the main event.

Play-by-play is updated in real time following each round. Press F5 on your keyboard to refresh the page.

Round 1 – Jab from Ron. Counter left my Mark. Ron with a big straight left that snaps Mark’s head back. Mark shakes it off and comes forward. Clinch from Mark, but Ron circles and is out. Nice left hook from Mark. Jab from Ron. Mark is countering nice with the left hand. Ron throws a three punch combo, and the last one, a left hook rocks Mark. Ron keeps throwing, another left hook drops Mark and a hammerfist or two finishes it. Holata is out cold. BIG KO!

Round 1 – Abe throws first, and Eric swings and misses. Jab from Eric. Straight right hand lands on Abe. Clinch from Abe, and he delivers a few knees from there. Nice leg kick from Abe. Leg kick from Eric, and Abe catches it and puts him on his back. Abe is in side control now. Abe transitions to full mount very easily. Big right hands from Abe, and Eric rolls to get away from the punishment. Abe takes his back, but gets reversed and now Eric is on top. Eric with a big hammerfist, and Abe kicks him off, but Eric maintains control then stands over Abe. Eric lands a big kick to the thigh, then dives back into the guard. Abe is throwing his legs up looking for a triangle. Eric dropping some hammerfists. Abe transitions to the armbar and Eric is in trouble. Eric defends, then rolls out and survives. Abe stands up and backs away. Eric lands a leg kick. Knee by Abe. Big left hand from Eric. Push kick from Eric, but Abe comes forward and staggers Eric with a three punch combo. Big uppercut from Abe. Eric survives, then eats a knee to the body in the clinch. He shakes it off and hurts Abe with a flush knee to the body, WOW! Lots of punishment in this one! I have to give the round to Eric Prindle, 10-9.

Round 2 – Eric coming forward. Push kick, looping right hand. Eric looks for the trip, but Abe defends. To the clinch, and Eric looks for another take down. He don’t get it, but fires off a nice knee to the head. Leg kick from Abe. Big left hand from Eric, but Abe is hanging in there. Leg kick from Eric. Left hand to the body from Eric. Abe fires back with a kick. Eric is leaning in now, then lands a big knee to the head. Body shots from Eric as he presses Abe into the cage. More leg kicks from Eric, then he locks his hands with the body lock. Abe counters with a big combo. Left hook from Eric staggers Abe. Abe takes another shot and falls on the leg of Eric. Full mount for Eric but he’s very high. Abe slips out the back but Eric scrambles and is in side control. Eric locks up the left arm of Abe and torques an americana. Somehow Abe survives the submission… it looked really bad. Abe rolls to his knees and gets caught in an anaconda, but gets out of that also. Both guys dive on a leg and go for ankle locks. Eric rolls out, but Abe keeps the foot and goes for a heel hook. Round 2 goes to Eric Prindle, 10-9.

Round 3 – Eric pressing out the gate. Winging right hand from Eric, leg kick from Abe. Nice one-two combo from Abe. He’s throwing the straighter punches, but Eric is more aggressive coming forward. Jab, push kick from Eric. To the clinch, Eric gets the body lock and is still trying for the trip take down but doesn’t get it. Big leg kick from Abe. Leg kick from Eric. Inside uppercut from Abe. Leg kick Abe, then a right hand. Abe shoots but gets stuffed. Eric lands in side control, and starts dropping short but effective hammerfists. Big right hand from Eric. Eric goes to the knee on belly, but leaves space and Abe scrambles, but Eric works right back to side control. Eric doing just enough to keep the fight on the ground. Big knee to the body gets Abe moving his hips, but he’s still stuck under Eric. He transitions to the mount and is landing repeated left hands from the top. Eric is still mostly in mount and is looking for a modified rear naked choke, but gives it up quickly. Big right hands from Eric, then alternating lefts and rights. Abe scrambles out and reverses just before the bell. Round 3 goes to Eric Prindle 10-9. Overall, 30-27 for Eric Prindle.

Round 1 – Zak flashes his jab but Blagoi steps away. Zak comes forward and lands a big head kick. Big left hand from Blagoi, and another. Blagoi with a big sambo throw. Full mount now. Blagoi is very high, leaves too much space and Zak retains half guard. Big left hand bounces the head of Zak off the mat. Nice control from Blagoi. Just as I type that, Zak reverses. Zak now on top, but Blagoi scrambles and is back up. Blagoi snaps his jab, then lands a left hand. Zak is swinging wildly, but Blagoi is landing with his punches right on the button. Zak tries to take him down, but Blagoi stays on his feet. They separate and Blagoi fires on his way out. Huge right hand from Blagoi stuns Zak. They are in the pocket now throwing HUGE, wild punches. Once again it’s Blagoi that is more accurate. He can take a punch, but how much more can Zak stay in there. Big knee to the head from Blagoi. Zak is coming forward. Right hand from Zak. Blagoi with a right hook, but Zak is walking right through them. Another right hook from Blagoi. Zak counters and scores with a right hand. First round goes to Blagoi, 10-9.

Round 2 – Zak stalking to open the round. Zak with another head kick, but he pays for it, eating a counter right hand. Zak pushes Blagoi into the cage, but ends up getting put on his back with a trip take down from Blagoi. Side control now for the sambo champion. Blagoi has the right arm of Zak and is looking for the americana. He doesn’t get it, but gains full mount on the scramble, and still has the arm cranked at a horrible angle. Blagoi gives up the arm then postures and starts throwing strikes from the top. Zak is trying to control the wrists of Zak, then bridges and escapes the mount. Zak goes for the legs, grabs a single, but Blagoi has his neck. Zak is fighting it off on his knees, but Blagoi finishes it with the standing guillotine. He is completely unconscious. Nice submission victory for Blagoi Ivanov.

Round 1 – Mike throws a jab that misses, then goes inside with a leg kick. Another kick from Mike. Neil lands a thudding leg kick. Mike lands another kick. Mike is scoring with kicks but Neil looks like he’s just waiting for an opening. He is staying patient as the smaller man circles out and away. Big leg kick from Neil. Neil feints another and Mike moves to check it even though it wasn’t thrown. Mike wades in, head high, and just eludes a left hook. Snapping leg kick from Neil. Mike is having trouble getting close enough to launch some effective offense. Another big kick from Neil. Mike lands one as well, but the difference between the kicks between the two is huge. He’s evading the punches of Neil mostly, but those kicks are going to take a toll. Overhand right from Mike, but it’s easily blocked. Good movement from Mike, but he eats a big counter left hand as he throws a kick. The fight hits the mat for a split second before they are back on their feet. Jab from Neil now. 30 seconds to go. Left hand misses from Neil, but the push kick doesn’t. Competitive round, but it goes to Neil Grove, 10-9.

Round 2 – Double jab shown from Mike, then he fires off a kick that lands. Looping right hand from Neil. To the body from Mike. Inside leg kick. Kick-jab combo from Neil. Spinning back kick from Neil misses, as the smaller man gets on his wheels and gets out of range. Nice jab from Mike. Neil is too hesitant waiting to counter. Leg kick from both guys. Double jab from Neil, and then he doubles up with a left hook. More jabs, Mike comes back with a body shot. Big leg kick from Neil, and the throws a three punch combo but lands only one. Leg kick from Mike. Kick to the body from Neil. Back to the body from Mike, but it’s one and done. Back to the body, then jab, overhand right from Mike. Neil lands a stiff jab that backs Mike up. Kick, body punch by Mike. Neil is still hesitating. Straight right hand off the kick for Neil. Head kick from Mike, then a right hand. He’s not staying in and putting combos together though, as he backs out after scoring. Leg kick is caught by Neil then he throws a looping right hand at the bell. Round 2 goes to Mike Hayes, 10-9.

Round 3 – Push kick from Mike. Lots of head movement and feinting from Mike to start. He lands two kicks, then a body punch. Neil is just not doing much already. Jab-body strike by Mike. Neil comes forward finally and throws a flurry but Mike gets out of there but is still in danger. Huge punches, and two big knees from Neil. Mike uses the opportunity while he is close and puts Neil on his back. He’s bleeding pretty back but is in side control, right where he wanted to be. Neil scrambles but Mike transitions to a north-south position. Neil rolls to his knees and grabs a leg, but Mike transitions and takes his back. Mike gets a hook in, but Neil grabs it and rips it out and goes for a leg, but Mike regains a dominant position on his back and gets both hooks in. He’s looking for the choke but doesn’t have it. He’s very high and slides off and is now on his back. Neil is on top now, and has Mike pressed against the cage. Neil lands a couple of shots then goes for a leg and gives up the position! Mike is on top now and in side control. Mike locks up the americana but Neil escapes, but is now eating punches to the body. Bell, and fight. Close round, but Neil may have one it with the flurry in the middle of the round. I won’t give him the whole round based off of one flurry. 10-9, Mike Hayes, and 29-28 overall for Hayes.

One thought on “Bellator 52 LIVE results and play-by-play”