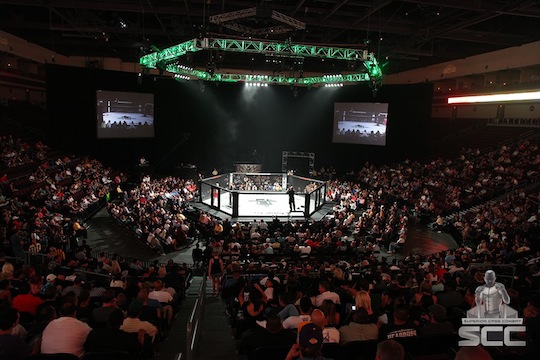 This fight will be preceded by the very first five round title fight in SCC history, between top contenders Bristol Marunde (14-6) and Elvis Mutapcic (9-2).

“This is the best fight card we have had in SCC so far.” SCC fight promoter Ryan Langmaid said. “John Alessio has decided to make the drop to the lightweight division to further his career in the sport, and seven time UFC vet Emerson will definitely be a tough fight in Alessio’s first cut ever. We are also happy to announce the five round title fight in the middleweight division. Marunde and Mutapcic both deserve the shot and this will be a war. The main card is packed with big names, and I especially look forward to see the SCC debuts of James McSweeney and Emanuel Newton, Shane Nelson as he takes on SCC 1 veteran Lance Wipf, and the heated rematch between Dave Terrel and Phil Dace.”

Tickets will be available at the Orleans Arena Box Office (888-234-2334), on www.orleansarena.com and on www.superiorcagecombat.com.

The Main Event of the night will feature UFC and WEC vet John “The Natural” Alessio and UFC vet Robert “The Saint” Emerson. Alessio is a true veteran of the sport. With almost 50 fights to his credit he has taken on some of the top fighters in the world in about every big show you can think of.

Unlike a lot of fighters who want an easy fight for their first cut to a lighter weight class, Alessio wants to fight nothing but top fighters and that’s what the SCC is making happen.

Robert “The Saint” Emerson has been in the cage with multiple top notch fighters in his 7 fight stint in the UFC. He is most well known for his fight with Gray Maynard (which was ruled a no contest due to both fighters being unconscious) and his 12 second knockout win over UFC featherweight contender Manny Gamburyan.

In the first ever SCC title fight, M1 and IFL vet Bristol Marunde will take on Elvis “The King” Mutapcic. Bristol Marunde is already a two time SCC vet with big wins over a much bigger Chuck “The Reverend” Grigsby and a quick submission over very experienced Victor “Superman” Moreno.

In this five round event he is looking to continue his win streak against Iowa fighter Elvis Mutapcic. The brutally powerful Mutapcic made his SCC debut August 20th at SCC 2. He came into that fight as an underdog in almost everyones mind. His opponent, Cezar Ferreira, was a highly touted prospect, who was a teammate and protégé of Vitor Belfort and was labeled the next big thing in the middleweight division. Obviously Elvis didn’t care about what anyone said, as he went ahead and knocked out Ferreira in only 25 seconds in the very first round.

Leading up to our main and co-main events, we will get the privilege of watching James “The Hammer” McSweeney taking on Emanuel “The Hardcore Kid” Newton, Steve Lopez going to war with Sean “P-Town” Wilson, “Sugar” Shane Nelson fighting Lance Wipf, and six (!) more action packed fights.