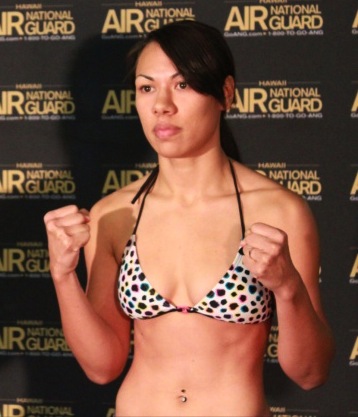 As mixed martial arts gets closer and closer to its twentieth year of existence as an official sport, fans are starting to see second-generation competitors pop up on local and national fight cards.

Hawaii is no different in that regard. The Pa’aluhi name is well-known and well-respected throughout the Islands, as the patriarch of the family was part of the beginnings of MMA in Hawaii.

Now, Raquel Pa’aluhi will carry on the family name as she is slated to compete at Pro Elite: “Arlovski vs. Lopez” this Saturday night. Suffice to say that it’s a pressure-packed situation. But she is up for the challenge.

Raquel Pa’aluhi (3-1) is one of the best female fighters from Hawaii…there’s no question about that. A pro since 2009, she has developed a reputation for stealing the show on the fight cards she appears on. And her athletic abilities have been passed down to her.

Pa’aluhi’s father was an outstanding football player and state champion wrestler in high school, and eventually competed on the early Superbrawl events, which were promoted by Pro Elite head T.Jay Thompson.

In addition, Raquel’s big brother is well-known for his time playing football for Oregon State. To put it lightly, sports runs through her veins. “Sports are a big part of my family’s being. It’s always been something that brought everyone together. We even have a dog club in our family. Every time you accomplish something big, sports-wise, you get promoted to a better dog. It sounds silly but it keeps us going!”

At this weekend’s event, Pa’aluhi will face Sarah McMann in a highly-anticipated encounter. McMann (3-0) is an undefeated competitor with a strong ground game who is coming off a victory over well-known female fighter Tonya Evinger.

“I know she’s a great wrestler. She’s very strong and she’s a bully in the cage,” explains Pa’aluhi. But the Hawaiian scrapper isn’t selling herself short, either. “I feel like I evolve every fight and I still have so much room to grow. And I am not specifically good at one thing. When people ask me what kind of fighter I am, I usually say I’m a freestyle fighter because I’m constantly trying to get better at everything. I am able to go wherever the fight takes me.” Those skills will serve Pa’aluhi well at this weekend’s tilt.

In MMA, everyone knows that nothing is guaranteed. The sport experiences upsets on a seemingly regular basis. So while the Hawaiian crowd will surely be in her corner for the fight, Pa’aluhi knows that she has to take the bout very, very seriously.

But if she does get in trouble in the cage, she will be prepared to deal with it by using her greatest strength. “It’s my heart. It’s always been the best thing about me. And when the fight gets tough it always pulls me through. I’m very mentally tough as well. And I can thank my Dad for that.”

No matter what the end of her fight brings on Saturday, the Hawaiian competitor has fireworks in store for the Pro Elite fans this weekend. “I plan to show the world that this is what I was made to do, and that Raquel Pa’aluhi is here to stay.”

If Raquel is any indication, the future of MMA both in Hawaii and abroad is incredibly bright.