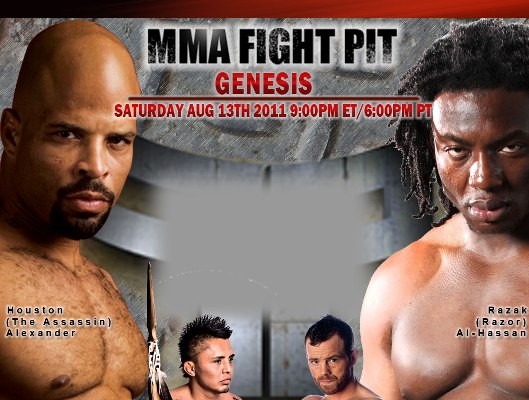 MMA Fight Pit hosts their inaugural event “Genesis” this evening at The Pit in Albuquerque, N.M. Headlining the card is a light heavyweight bout between the heavy-handed Houston Alexander and fellow UFC veteran Razak Al-Hassan.

Round 1 – The return of “The Lunatik” Junie Browning. He came in seven pounds over weight at 172 pounds. He had to give his opponent a portion of his purse. Browning looks chubby. Junie is training at Legends MMA now days with Eddie Bravo. The announcer said he trained at Team Tompkins and Junie and his corner shook their head “No”. Leg kick from Junie. Body shot from Junie, leg kick. Junie shoots, puts Clark on his back. Junie on top in half guard. Clark has full guard. Goes for an armbar. Junie picks him up, lets him down. Junie has an upside down leg triangle, lets it go and takes Clark’s back. Junie looking for a Twister. Comes close. Ref stands them up. Right hand from Junie, right to the body. Shoots, stuffed. Clark postures over Junie with punches. Clark passes to side control. Big knees to Junie’s ribs. Browning smashes him with elbows and Junie taps out to strikes. Clark took this bout on two days notice. Kruck said he was surprised Junie tapped so fast. Junie has lost his last four fights.

Round 1 – Chavez misses a high kick. Rael catches it and puts Chavez on her back. Rael in side control. Chavez traps Rael’s arm between her legs. Rael postures up, drops into a heel hook attempt, Chavez fights back, scissors lock around Rael’s waist from Chavez. Now she locks up Rael’s leg with a scissors lock, Rael still on top in half guard with just under two minutes to go. Chavez puts some heels into the back of Rael’s thighs. Rael postures up with punches. Chavez goes for an ankle. Tries to sweep. Rael with some hammerfists. 10-9 Rael.

Round 2 – Superman punch and a knee from Rael. She takes Chavez down and starts landing punches from a backward mount position. Chavez pushes off the cage but she is still on bottom. Rael moves to side control and Chavez sweeps. Rael locks on a guillotine, squeezes it tight. Chavez gives a thumbs up and puts some elbows into Rael’s thigh. Chavez puts a nasty knee into Rael’s mid-section. Rael escapes, they scramble, Rael on bottom, she spins and ends up in side control on top. Rael working with elbow strikes, lands several just before the bell. 10-9 Rael.

Round 1 – “Slick”Willie Parks is a big favorite in this bout. He appears much shorter than Yager’s hair. Both guys are 27, although Parks looks 35 or 40. Touch gloves. Left hand from Parks, he’s chasing Yager. Parks lands another left and Yager goes down, but he jumps back up with a jumping roundhouse. Parks shoots, pushes Yager against the cage. Big slam from Parks who is on top in half guard. Big right from Yager from off his back. Yager with full guard. Yager striking off his back. Parks postures up with big punches. Ref watching closely. Yager gets his feet on the fence. Parks was an Iowa State wrestler. Parks was at one time roommate with Cain Velasquez in college. Parks postures up with a big right. One minute to go. Parks has his arms in arm triangle position but he’s not able to get his leg free to move over. Yager lands a couple nice elbows before the bell. 10-9 Parks.

Round 2 – Overhand right from Yager misses and Parks puts him on his back but Yager locked him up in a guillotine and Parks taps out. That’s an ENORMOUS win for Yager and the crowd is DEAD silent. Our girl Susan Cingari has an interview with Yager that we did not have time to get up before this fight, but it will be posted as soon as we can so stay tuned for that.

Round 1 – Leg kick from McLean. East shoots for a single, McLean stops it and tries a hip toss. East puts him down and is inside his full guard. McLean eats a right. East in half guard on top, lands several elbows. McLean is hurt with the elbows. East drops about five more and McLean is done. He is unable to get up. Gets to his knees and stays there for a minute or so. He gets up and is very disappointed.

East is 6-0 in his last six bouts. Dude is only 20-years-old. Pay attention to this guy. He said he spars with Jon Jones everyday. East is part of the Jackson camp in Albuquerque.

Round 1 – This is a huge fight for Coty, and for Jens. I really like this match-up. Coty is an awesome guy. Check out our interview with Coty from his WEC days on the site. This is Jens’ first fight at 135.  It will be interesting to see how he performs at this weight. It looks to suit him. He looks good. Pulver’s odds matches his weight here at +135. Ox’s odds are -165. Ox jogs around the cage; bumps fists with Jens. The Native Americans love Coty. He reminds me of Goze, if Goze fought. Jens showing a jab. Head kick from Jens misses. Front kick from Ox misses. Big leg kick from Ox. Jens showing a jab. Ox swings big, Pulver rolls with it. Lands a counter right. Shows a jab. Uppercut from Ox scores. Jens checks a leg kick. High kick from Jens is blocked. One two low kick from Ox. They trade in teh pocket. Nice body shot from Ox. Double jab from Jens. Jens lands a counter shot. He drops Wheeler with a big right. Jens follows up. Can’t finish. Ox is up, catches Jens’ leg.  Jens is free. Wheeler misses a spinning backfist. Body kick from Wheeler, they exchange punches. 10-9 Jens Pulver. Replay shows Jens dropping Ox with a left hook.

Round 2 –  Body kick from Ox, he misses a jumping front kick. Body kick from Ox. Front kick from Ox. Jens hunting with punches, lands a counter right. One two from Ox. Jens drops Ox with a left. Jens raises his hands but the ref didn’t stop it. Ox gets up and Jens chases him across the cage, lands a kick a punch and Ox goes down. Ref looks like a deer in a headlight. Jens finishes him off with a straight left on the chin and an elbow. Jens Pulver is back, wins his inaugural fight at bantamweight. Nice performance from Jens. He applauds as Ox gets to his feet.

Replay shows Razak was off balance on that knockdown. Doctor is looking at Razor’s finger between rounds. They stop it and Houston is awarded the victory. Razak unable to continue. Houston just said he’s coming for that belt. What belt he’s talking about I do not know. Razak dislocated his finger. — That’s the first time I’ve ever seen this. I wonder what Urijah Faber thinks…a guy who had TWO BROKEN HANDS and fought the whole fight like that for the most part, using elbows and kicks.  In this fight, I would say it’s not the fighter’s fault but how would the doctor know about his finger if he didn’t tell him? — Houston just said he can fight longer than Randy Couture because he’s in better shape.  Very strange ending to the evening.