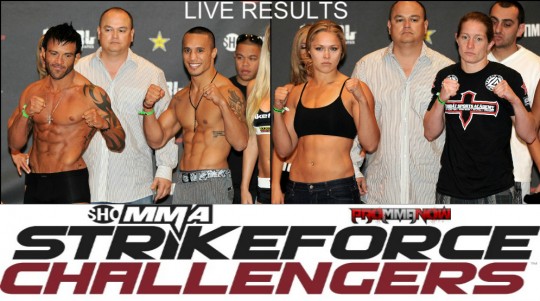 Also, all eyes will be on 24-year-old Olympic medalist Ronda Rousey (2-0) as she makes her Strikeforce debut against the more experienced 30-year-old Sarah “The Monster” D’Alelio (4-1) in a women’s 145-pound match-up.

Round 1 – Mehmen attacks first with punches. Jones fires back. Jones lands a left as Mehmen clinches up with Jones against the cage. Right hand by Jones forces him to retreat. A flying knee from Jones lands on the chin and Mehmen  is hurt. Jones jumps on his back but it seems like Mehemen is recovered and gets free. They start exchanging, clinch up, start exchanging and Mehmen takes a low blow that halts the action. Mehmen attacks, gets inside and gives a big slam. Mehmen in sided control, Jones gets full guard. Mehmen using a cautious ground and pound. But Jones is staying busy shrimping trying to  get a look. Mehmen with a few punches and elbows, nothing big. One minute to go. Mehmen moves to half guard. Mehmen is winning the round although doing no damage. Roy’s corner tells him to stand up but that’s not happening.  10-9 Mehmen. — The Fight Professor and Miletich think Jones won the round.

Round 2 – Jones tries a spinning kick and Mehmen puts him on his back out of mid air. Mehmen is bleeding profusely and the ref stops it to look at the cut. The doctor is called in. Commentators think they need to stop it due to the bad cut over the eye. The doctor said it was “down to the bone”. The doc said let it go and we’ll check it between rounds. They restart the fight with Mehmen on top in half guard. I’m curious about what cut Mehmen, must have been the foot of Jones on that kick. Mehmen continues his attack from inside Jones’ full guard. Mehmen is bleeding all over Jones. Two minutes to go. Couple of nice elbows from Mehmen. It’s a blood bath. Jones attempts a “rib crusher” scissors lock. Mehmen is unfazed. They are sliding on the canvas on the blood. Mehmen gets in some good punches to the cheers of the crowd. Turning on the heat with 25 seconds to go. Jones doing good defending.  They could stop this fight here. 10-9 Mehmen. Mehmen’s eye looks horrible. It’s a goat’s vagina and  the “cut man” didn’t even put any vaseline on it that I could tell. It’s an enormous cut.

Round 3 – Mehmen shoots. Jones attempts a guillotine but Mehmen slips out. Mehmen goes back to attacking from top position. Jones tries to get up, no dice. Mehmen staying busy. Jones makes a move to get up but Mehmen controls. Jones looking for a sub, nothing there. Ref finally stands them up. Nice jab to the busted up eye of Mehmen. Mehmen tries to tie it up but Jones stuffs it. Mehmen asks for help to get the blood out of his eye but the ref said either you can’t fight or  you can’t. He fights. Mehmen shoots, Jones works to stop it but eventually ends up on his back once again. Jones tries to get up. Mehmen showing some good wrestling control. Jones gives up his back, now gets full mounted by Mehmen. Mehmen attacks with several punches with 10 seconds left. 10-9 and 30-27 for Mehmen as I see it. Mehmen won but he’s going to end up with a lot of stitches.

Round 1 – Ronda usually submits her opponents very quickly. She may not be able to do that with D’Alelio who has BJJ skills. However, D’Alelio just said she believes her biggest advantage will be standing. Steve Mazzagatti was a gunslinger in a past life. Jabs and a clinch from Ronda. She jumps into a flying armbar, lets it go when she feels the girl tap, she throws it back up and the ref stops it. D’Alelio is complaining. She’s saying she didn’t tap and nothing is wrong with her arm. The replay shows no tap. It was a beautiful transition to an armbar but she didn’t tap. Sarah said in her post-fight interview that she said “owww” but she didn’t say she tapped. Ronda said she thought she heard her say “tap” so she let it go and told the ref she tapped. –Folks, this was Mazzagatti’s fault. 100%. He needed to take control there. However, Ronda was just looking out for her Sarah because her arm did appear to pop. Just is unfortunate there has to be some controversy around Ronda’s win. This same thing happened back in Tuff N Uff when she fought there.

Check out what Dr. Rhadi had to say about this fight: Two-time Olympian Ronda Rousey wins in the midst of controversy.

Round 1 – Healy stalking. Front kick from Wisely and Healy grabs the leg. Wisely hopping, Healy sweeps the back leg — “sweep the leg!” — Healy inside full guard. Wisely throws up an armbar and locks it up. Healy gets out. Healy rares back with a big right. Wisely gets to his knees and feet. Healy stalking. Healy lands a couple shots as Wisely retreats. Healy chases, eventually puts Wisely on his back. Wisely with heels on hips. Wisely grabs Healy’s ankle and gets him down. Goes for a heel hook, then kneebar, Healy is out and up. Healy trying to pass guard but can’t get it. Healy stands up throws down a big shot but still can’t pass guard. Healy stays busy but Wisely gets up. 10-9 Healy.

Round 2 – They exchange punches. Healy chasing. Wisely pins Healy against the cage. Wisely rolls into a kneebar but Healy pulls out. Healy stands over Wisely, now inside his guard. Wisely defending well from the bottom. Looks for an armbar. Wisely drops several shots, tries to pass Wisely’s guard but still can’t do it. Wisely in half guard, almost at a stale mate with just under two minutes to go. Healy finally gets side control. Ref tells them to stay busy. B.J. Penn is in Healy’s corner. Healy puts knees into his ribs. Penn calls for knees and elbows. Body shots from Healy. Wisely quickly throws up an armbar while caught in side control. Crazy quick. 10-9 Healy.

Round 3 – Left hand from Wisely. Healy pins him to the cage. Knee from Healy to the calf. Wisely quickly turns the tables, looks for the single. Healy puts him on his back. Healy standing over him and drops down into guard. Nice punches from Healy from top control. Wisely looking for and arm to hold. Penn telling him to watch out for that. Wisely staying busy off his back, elbows to the back of the head. Two minutes to go. Healy continues the attack from the top until the round ends. 10-9 Healy.  30-27 Healy as I see it.

Round 3 – Double jab from James. He shoots, puts Villefort against the cage. Villefort shrugs him off. They exchange punches. James lands an uppercut, a nice left. Villefort dances and drops his hands, sticks out his chin. Villefort puts him on his back. James reverses and Villefort locks up an arm in guillotine. James escapes and ends up inside full guard. Closed. Villefort lands elbows off his back. James with body shots with 2:30 to go. James staying busy with ground and pound. Ref stands them up. Left jab from James. Knee from Villefort, back elbow. James puts him on his back and continues grinding from inside full guard. One minute to go. James finishes it out on top. 10-9 James. 29-28 Villefort as I see it. Miletich disagrees, Fight Professor agrees.

How anyone could score that 30-27 seems absurd.

Round 3 – Inside leg kick, punch from Gurgel, repeat. Gurgel puts Duarte against the cage. Duarte gets free. Leg kick from Gurgel. Left hook from Gurgel catches Duarte on the chin. It was about the fourth punch of a combo that hit Duarte. Gurgel lands a head kick. Gurgel goes for a takedown, ends up being full mounted by Duarte. Gurgel gives up his back but Duarte puts him on his back. Gurgel with butterfly guard. 3:00 to go. Gurgel trying to make a move. Gurgel lifts him with butterfly legs. Elbow from Gurgel. Duarte  with a punch. Gurgel staying busy with punches from the bottom. Nice elbows too, driving the point to the crown. Duarte lets him up with a minute to go. Leg kick from Gurgel, right hand. Head kick from Gurgel, big double leg takedown from Duarte. Gurgel with elbows to the head. Man, close fight, going to be VERY interesting to see how the refs score this. 10-9 Gurgel and 29-28 Gurgel as I see it. Fight Professor and Miletich agree with me.