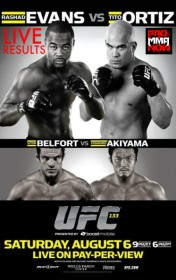 PHILADELPHIA – “UFC 133: Evans vs. Ortiz” takes place this evening at the Wells Fargo Center in Philadelphia, Pa., and features former light heavyweight champions Tito Ortiz and Rashad Evans battling it out in the main event in a rematch from a 2007 bout that ended in a draw.

ProMMAnow.com (www.prommanow.com) will provide LIVE results and play-by-play commentary of UFC 133. Be sure to check out our UFC 133 Staff Picks and stick around to watch the UFC 133 post-fight press conference in our UFC Room immediately following the main event.

Round 2 – Hamill tries to get inside but eats a couple shots. Hamill misses a hook, covers up as Gustafsson fires back. Hamill eats a nice combo from Gustafsson. Hamill covers up and blocks two punches and a kick from Gustafsson. Big leg kick from Gustafsson. Hamill has the worst takedown attempts. Gustafsson hurts Hamill with some big shots and he goes down. Gustafsson mounts him and punches him in the face until the ref stops it.  It started with a straight left, then an uppercut, and the second uppercut dropped him. He then mounted and dropped elbows and punches finishing “The Hammer”. Will Hamill get his walking papers? Is it time? Hamill is a great guy, a great story, but he’s just not progressing.

Round 1 – Left jab from Rory, he shrugs off a shot. Leg kick from Pyle, Rory catches it and an off balance Pyle ends up on his back. Pyle shoots and gets the takedown but Rory is back up. Pule drags him back down and is on top, lands a couple punches but Rory gets up and lands a combo. Big left hand from Rory. He locks on a guilltone on Pyle. Pyle twists out of it, ends up on his back with Rory in full guard. Pyle looks for a leg and Rory stands up, kicks Pyle’s thigh, again. MacDonald jumps inside guard, lands a left. Pyle with a closed guard. Big left that hurts Pyle. Pyle turtles and covers up. MacDonald lands some huge shots and Pyle is done. That first left hook hurt Pyle very badly and caused him to cover up in a pure defensive position. That was a HUGE win for MacDonald. Mike Pyle is a very good seasoned veteran, one of Xtreme Couture’s best, and he just got demolished. Rogan said MacDonald may have more potential than GSP, who is one of Rory’s TriStar teammates in Canada.

NOTES: Rory actually said he wished the fight could have gone longer so he could show more.

Round 1 – Jorge Rivera may have the best voice in MMA. He just sounds like a smoothe cat. And he is a smoothe cat. Leg kick from Rivera. Rivera ducks a punch, they clinch, Philippou pushes him to the cage. Thai plum from Rivera but Philippou puts him on his back. Rogan said before the fight, Rivera would not have to worry about takedowns. Rivera gets his back to the cage. Philippou moves to half guard. Rivera working hard to get up, eats a couple shots but gets up. Philippou still clinching, pushing Rivera to the cage. They wrestle from the clinch and the ref separates them. Big leg kick from Philippou. Rivera swings big and misses and Philippou initiates the clinch. Rivera pushes him to the cage. Nice right hand from Rivera, they clinch. Knees to the thigh from Rivera, a couple nice punches from inside. Philippou scores with an uppercut. They square up in the center. Twenty seconds to go. Philippou comes in swinging, they clinch, time runs out to the boos of the crowd. Philippou 10-9.

Round 1 – Dennis Hallman is wearing the worst shorts ever. He is literally wearing manties. Why? Why? Ebersole has his chest hair shaven into an arrow pointing at his chin and Hallman is wearing the same type of manties Bruce Lee wore in Enter the Dragon. Hallman looks like he’s about to dance at Chip N’ Dales. Ridiculous really. He literally has one sponsor on the front of his manties and if your read it, you’ll be guilty of staring at Superman’s penis. It says “training mask” over Hallman’s penis. Hallman attacks, Ebersole is busy thinking about those manites and Hallman has his back with a body triangle locked on. Ebersole has nine losses via submission, so this is bad. Hallman may be one of the top three submission fighters in pro MMA. But those manties have to go my man. Hallman with both hooks in, puts some heels in Ebersole’s thighs. The crowd boos as Superman’s tactics. Ebersole reverses as Hallman tries to mount. Hallman locks on a guillotine. Ebersole gets out. Ebersole postures up with a punch and a big elbow over Hallman’s left eye. Another huge elbow hurts Hallman. He lands another big elbow, and four more that bloody Hallman. Hallman has full guard but Ebersole continues the assault with some vicious hammerfists, Hallman goes limp after two big elbows and the ref stops it.

NOTES: Charles Barkley is in the audience. And I have to say I feel just a little vindicated by Ebersole beating up a man in manties.

Round 1 – Akiyama may have the best walkout music, next to Fedor. Love that Fedor music. — “Sexyama!”…. says Buffer. “The Phenom!” Akiyama sticks out his tongue. Former UFC champs have a certain aura. Head kick from Belfort, Akiyama blocks, but it knocks him back. High kick blocked by Vitor. Vitor hurts Akiyama and he is face down and out cold. It happened quickly. Akiyama finally sits up and opens his eyes. “I’m back!” yells Vitor. Vitor landed a left, then jumped on him with several left hooks. Very academic win. Looked like he’s in the best shape of his career.

NOTES: Vitor was very pumped up for the win. Mickey Rourke and Bernard Hopkins are in the house. Be sure to check out the Bernard Hopkins/Rashad Evans video we put up yesterday. The champ is teaching Rashad some finer points of the boxing game just days before this fight. Let’s see if he puts those pointers to use here. It mostly had to do with defense and how to tuck your chin. BHOP said he used to train with a tennis ball under his chin, holding it there between his chin and neck; this was to teach him how to keep his chin tucked. — Tito has a man yelling in his ear all the way to the cage, likely saying things like, “You are the baddest mofo on the planet… he continues this for the whole walk out, carrying his flag. Tito could win this fight folks… and it could be the fighter story of the year if he does. He’s kind of the last of the old school, the prodigal son grown up. Tito comes out to Eminem… both are hype, Tito looking like an MMA version of Eminem. — Rashad’s turn —-Walks out to some rap. Dances when he gets up to the cage. Biggie Smalls playing. He crawls into the cage and dances as Tito paces…

Round 1 – This feels big… Bruce Buffer almost touches Ortiz’s nose with his nose as he screams out his name. They touch gloves. Ortiz with feints and a kick. Rashad jabs. Tito pressing. Left hooks from Rashad. Tito with a right, misses. Left hook from Tito lands. Leg kick from Rashad scores. Right hand from Tito catches the shoulder. Overhand right from Rashad lands on top of the head. Tito looks confident with his hands. Tito shoots, puts Rashad down, but not all the way down. Rashad still has a knee on the ground but Tito still driving. Picks up both his legs but Rashad balances on his hands. Rashad landing short rabbit punches to the head. Rashad stands, Tito has a single, lets it go. Rashad attacks. They exchange big in the pockedt, big knee from Ortiz. Rashad attacks big, punches, combos, a knee. Trying to finish and overwhelm Tito like Liddell. Knee from Tito to the body. Elbow from Rashad, Ortiz with a knee. Big slam from Rashad and he pounces with big punches. He gets half mount. Rashad moves to side control. Tito covering up, looks bad.

Round 2 – Tito doesn’t looks so confident now. They take the center. Tito misses a leg kick. Rashad bouncing, pops a jab. Tito with a combo, misses. Rashad punches, misses. Tito locks on a guillotine and drops down. It’s tight. But Rashad pops out. Tito didn’t have guard. Rashad on top now in half mount. Moves to side control. Three minutes left. Rashad goes knee to belly, lands several left hands. Tito gives a thumbs up to the ref. Evans tries to get a crucifix and gets it. He punishes Tito, Tito gets his arm out. Elbow from Rashad. Tito kicks off the fence. He covers up. Tito gets to his knees. Rashad tries to take his back. Tito rolls for a leg and Rashad pulls out. Less than a minute to go. Rashad in side control. Tito kicks off the fence. He’s on his knees and Rashad is standing, puts a knee to Tito’s chest and Tito goes down covers up and Rashad finishes him with several punches. That knee hurt Tito badly. Tito is up and okay. Knee was right to the sternum. Rashad will fight the winner of Jon Jones vs. Rampage Jackson for the title. He proved where he stands tonight.

NOTES: Rashad said after the fight whether it was Jones or Rampage he was getting his belt back. Tito said he took the fight on short notice and gave it his best. He said he gave it is all, but he’s obviously disappointed. He apologizes to his fans. “Suga” Rashad looks good at his new camp.