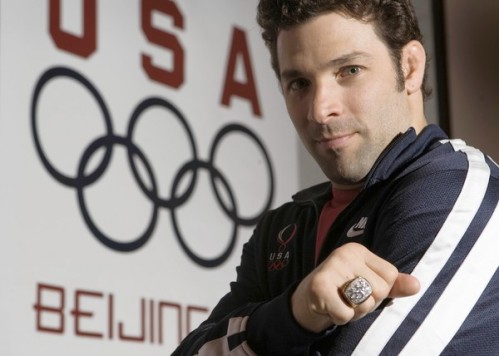 After Clay Guida defeated Anthony Pettis last weekend at the TUF 13 Finale, he took time to mention 2006 Greco-Roman World bronze medalist Lindsey Durlacher who passed away over the weekend.

In addition to his wrestling exploits, Durlacher also fought MMA three times between 2002-2005. The only blemish on his 2-1 record was a decision loss to former WEC champion Miguel Torres in 2002.

Durlacher was at home recovering from a surgery on Wednesday. He had suffered a broken sternum in a snowmobile accident in February. No details are available on the cause of his death.

Arrangements have not yet been finalized. USA Wrestling will share the information as soon as it becomes available. Preliminary plans are for a memorial service in the Chicago area, where Durlacher grew up and where he has family. He had numerous friends across the United States and around the world.

“The wrestling community is extremely shocked and saddened by the loss of Lindsey Durlacher,” said USA Wrestling Executive Director Rich Bender. “We lost a true champion today. Our thoughts and prayers go out to his family and friends during this difficult time.”

For the last year, Durlacher has served as a resident coach at the RiNo Sport Galleri in Denver.

“Lindsey was a close friend that I have known for over 15 years and the recent news was tragic. His loss was sudden and unexpected and not only was he a friend but he was also a cherished part of the RiNo Team. We will miss his presence on a daily basis and offer our deepest sympathy to those closest to him. We will cherish his life and success both on and off the mat,” said Ryan Tobin of RiNo Sport Galleri.