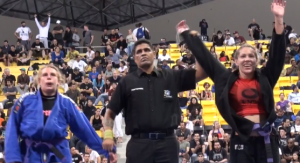 The BJJ 2011 World Championships are going down this weekend in Long Beach, Calif. Making her debut at the Worlds this year was none other than Strikeforce 145-pound women’s champion, Cristiane “Cyborg” Santos.

Competing at heavyweight in the purple belt division, Cyborg out-pointed Sarah Draht 16-0 in her first match. Then in the finals she out-pointed Amanda Lucas 8-0 (George Lucas’ daughter).

Cyborg has not fought in MMA and defended her Strikeforce title since June 2010. The champ is looking to stay busy competing in events like this outside of MMA to keep her skills fine tuned until Strikeforce finds her a suitable opponent.