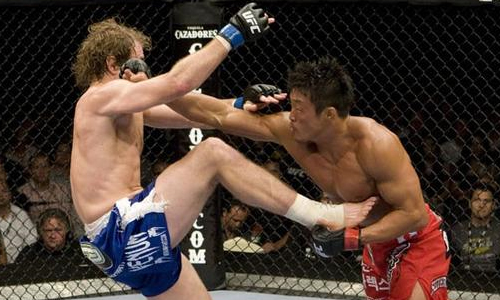 UFC President Dana White has officially announced that middleweights Vitor Belfort and Yoshihiro Akiyama will square off at UFC 133. The card takes place on August 6 and the Wells Fargo Center in Philadelphia.

Belfort challenged Anderson Silva for the middleweight belt back at UFC 126. The champion defeated Belfort with a highlight-reel front kick to the face in the first round. The defeat snapped a five-fight and four-year winning streak for the former light heavyweight champion. During the stretch, Belfort had defeated Rich Franklin and Matt Lindland.

“The Phenom” burst onto the scene all the way back at UFC 12. He won a four-man one-night tournament in exactly two minutes of action. He defeated Randy Couture in 2004 to claim the UFC light heavyweight title.

Akiyama will be looking to stop a losing streak. He won his UFC debut over Alan Belcher at UFC 100, but since he has recently dropped back-to-back fights against Chris Leben and Michael Bisping. He was originally scheduled to fight Nate Marquardt at UFC 128, but did not compete due to the natural disaster in Japan.

Before converting to MMA, Akiyama competed extensively in judo. He was able to capture Asian Championships as a competitor for South Korea and Japan. In 2006, he defeated Taiei Kin, Kestutis Smirnovas and Melvin Manhoef to claim the K-1 Hero’s Light Heavyweight title.