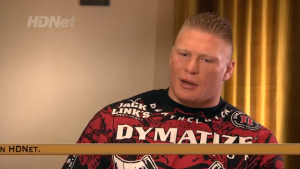 This Friday on HDNet, Mike Straka will have some “Fighting Words” with former UFC heavyweight champion Brock Lesnar.

Straka talks with the former WWE star about coaching this season of The Ultimate Fighter 13 and  plans for a life after fighting.

Lesnar says his heart is on the farm and being close to his wife and kids and when it comes down to it “he’s just a kid from Webster, S.D., who happens to think he’s the toughest S.O.B. on the planet.”

It sounds like the big guy might not have too many fights left in him, especially if he doesn’t regain the title. Your thoughts? Mike Straka’s Fighting Words with Brock Lesnar premieres Friday, April 15, at 8:30 p.m. ET.

3 thoughts on “Brock Lesnar: “I’m planning my retirement every day””