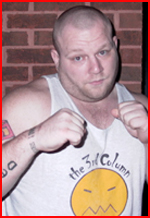 Ivanov (8-0), in what will be his Bellator and U.S. debut, was originally scheduled to face John “Doo Doo” Brown, but Brown has pulled out of the fight for reasons unknown to us at this time.

ProMMAnow.com learned of Ivanov’s opponent change from sources close to the situation this afternoon.

Ivey (29-44), a Clarksville, Tenn., resident who trains at SSF Submission Academy, has been fighting professionally since 1998 and has been in the cage with nearly every single old school heavyweight in the game, and a lot of newer ones as well.

The veteran is going to have his hands full against Ivanov though. The Bulgarian is most known for his win over Fedor Emelianenko in the semifinal round of the 2008 World Sambo Championships.

Ivanov turned his focus toward MMA in 2008 and remains undefeated. His most notable MMA win thus far is a split decision win over the iron-headed Pride veteran Kazuyuki Fujita at Sengoku 9 in Aug. 2009.

Bellator 38 features the opening round of the season four light heavyweight tournament and will air LIVE on MTV2 starting at 9 p.m. ET/ 6 p.m. PT.

UPDATE (March 23) – Apparently unbeknownst to Ivey, the Georgia State Athletic Commission had him on 30-day suspension due to a cut from a fight a few weeks back. Although Bellator’s doctor approved Ivey to fight, Georgia’s commission would not reverse their decision. At this time, Blagoi Ivanov has no known opponent.