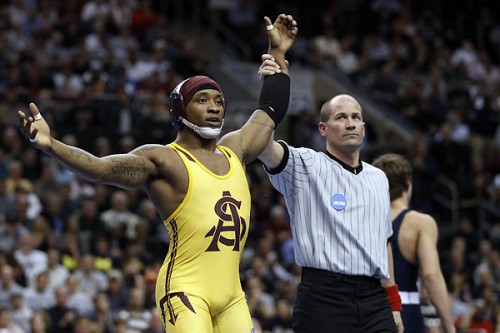 Shortly after winning an NCAA Division I wrestling title at 157 pounds, Arizona State’s Bubba Jenkins said, “MMA is next. I am excited about it. I’ve got fast hands, fast feet. The camera’s going to love me, I hope. I’ve got a good smile for it. I don’t have a face for radio, so I’m ready to go.”

As his eventual debut draws closer, the normal questions reserved for prospects will start to pop up. For example, “how will he pick up the submission game?” or how will he deal with getting hit?”

Jenkins hasn’t throw a punch or fought off a guillotine choke in competition, but putting money down on his future success in MMA is a smart bet.

Last Sunday, the Virginia Beach native did not just win his first NCAA title. He did it against an undefeated prodigy, David Taylor, and he did it by fall. He caught the scrambler in an inside cradle and stuck him in the second period. Sitting in Taylor’s corner was the only man to go undefeated over a four year collegiate career, Olympic gold medalist Cael Sanderson. He is also the man who released Jenkins from his scholarship at Penn State.

Jenkins began his collegiate career as a Nittany Lion. In 2008, he finished second at the national tournament losing only to Iowa’s Brent Metcalf. He also captured a junior world championship for the U.S. in 2007.

In a move that shocked the wrestling community, Penn State hired Sanderson away from his alma mater, Iowa State. He was expected to revive the program, and he did just that, winning the 2011 National Championship. However, Jenkins and Sanderson never clicked. After redshirting the first semester of the 2010 season, Jenkins was released from his scholarship.

“It was a decision that was given to me,” Jenkins told the Collegian, the Penn State campus newspaper. “I had no choice.” According to reports, Sanderson also refused to let Jenkins transfer to a Big Ten or Big 12 without sacrificing his final year of eligibility.

Jenkins finally surfaced at Arizona State, the only school west of Oklahoma to ever win an NCAA Division I team championship. It is also the alma mater of Eric Larkin, CB Dollaway, Ryan Bader and Don Frye. Bellator champion Ben Askren is currently an assistant coach.

“Right when I win my national championship, I’m starting to fight,” Jenkins told AZCentral after arriving on campus. “People are telling me I need to go freestyle, but it’s a new era, and I’ve been doing this wrestling thing for a while. I’m trying to evolve into getting UFC while I’m young and my while body can still do things I need it to do.”

Despite his early prediction of success, it was not easy for Jenkins. He dropped his second match to Tyler Chang of NAIA school Embry Riddle. He was forced to medically forfeit three matches and missed almost two whole months with injuries. In the finals of the Pac-10 tournament, he lost in overtime to Adam Hall of Boise State.

After moving across the country, he returned to Pennsylvania. In the end, on the biggest stage, he walked away a champion.

5 thoughts on “Bubba Jenkins coming to a cage near you”