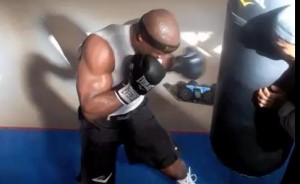 Check out this video of former WWE star Bobby Lashley shadow-boxing and working the mits and heavy bag. The MMA heavyweight’s striking is looking pretty good. His punches have a nice snap, he’s putting his hips into it, and his big body shots on the bag would likely crumple a lot of men.

While Lashley had a setback in his last outing against Chad Griggs, it’s not the end of the world for the big guy. He did choose to leave Strikeforce, as he told ProMMAnow.com in an interview last month, but he has a fight coming up against James Jack at Titan Fighting Championship 17 later this month, and has no intention of giving up.

He is still a very good wrestler. He took Griggs down practically at will. He’s athletic, fast, strong and has a lot going for him. As long as he keeps at it, he could put together a respectable MMA run before it’s all said and done. Be sure to watch Lashley when he returns to action on March 25 against Jack in the Titan FC 17 main event on HDNet.