MMA vs. Wrestling: Is there a debate? 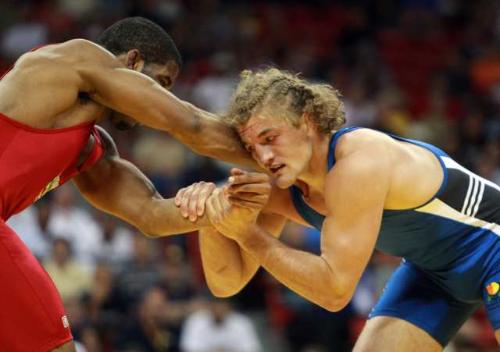 The wrestling diaspora in MMA is really fascinating if you really think about it. MMA, or at least the UFC, is insanely popular right now, while wrestling outside of certain places like Iowa struggles to draw any attention.

For some reason, mainstream sports media outlets can’t approach a wrestling story without attacking the “is MMA good for wrestling?” angle. Mechelle Voepel, for ESPN.com, is the latest to give it a shot.

[Iowa State Coach Kevin Jackson said,]”I do feel like MMA does hurt USA Wrestling’s chances to win at the world and Olympic level. Because it takes away from our depth when we have very good wrestlers who choose to go directly from college to MMA.”

Former Iowa coach Dan Gable agrees that USA Wrestling should help young wrestlers who are interested in MMA navigate the best path to other opportunities beyond wrestling.

“I love that they have another opportunity to compete and make money,” Gable said. “But the key thing is that wrestling is in the educational system, and it needs to stay there. We don’t want people to think you go into a wrestling program to come out an MMA fighter. I think that’s for a select few. We do want MMA to be included in the diagram.”

Jackson, the same guy who fought Frank Shamrock at UFC Japan, brings up the point that MMA has pulled fighters away from the world and Olympic level. Fighters like Cain Velasquez, Mark Ellis and Jake Rosholt could be regulars on the international circuit right now and training for the 2012 Olympics. However, the Olympic styles, freestyle and Greco-Roman, are almost as different from folkstyle as MMA, as Ben Askren‘s brother Max explains in a blog for Flowrestling.org.

It would be shocking if the success of wrestlers in MMA does not drive a few more people into wrestling rooms. The best wrestlers will still spend at least a few years trying to win Olympic medals before fighting MMA like Muhammed Lawal, Daniel Cormier, Randy Couture and Dan Henderson. It will be interesting to see how it all shakes out. At the 2010 World Championships, the men’s freestyle and Greco-Roman teams brought home zero medals, and MMA clearly wasn’t the reason.