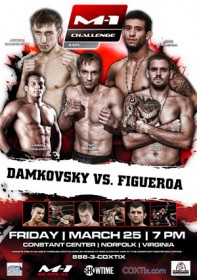 Also featured on the card is a lightweight fight between Alexander Sarnavskiy and Josh Bacallao, and “The Ultimate Fighter” season 8 finalist, Vinny Magalhaes will take on a light heavyweight opponent to be announced.

Up until this point, M-1 Global’s relationship with Showtime was limited to their co-promotions with Strikeforce whenever the M-1 Global-managed Fedor Emelianenko would compete on their cards.

Ken Hershman, the Executive Vice President and General Manager of SHOWTIME Sports, commented on this new partnership with M-1 Global:

“Our ability to televise quality boxing and MMA fights at the highest level has been aided tremendously by our commitment to showcasing prospects and lesser known international stars on our feeder series like ShoBox: The New Generation and STRIKEFORCE Challengers,. M-1 Challenge events fit perfectly into that mold and will enhance our mixed martial arts offerings even further.”

Calling the action from ringside will be commentator Mauro Ranallo, along with MMA veteran fighter Pat Miletich serving as analyst.