Middleweight and welterweight title-holders to collide in main event 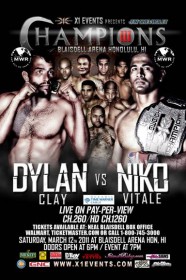 Honolulu, HI (USA): Top Hawaiian fight promotion X-1 World Events is back, and its bringing the heavy artillery. “Champions III” will feature an all championship title fight card, with all the local favorites defending their titles. In the main event, X-1 Middleweight Champion Falaniko Vitale will put his belt on the line against the X-1 Welterweight Champion, Dylan Clay. The co-main event will see Harris “The Hitman” Sarmiento defend his X-1 lightweight strap against striking specialist Max Holloway. In addition, Ricky Wallace and Eben Kaneshiro will tangle for Wallace’s X-1 featherweight title, and Russell Doane’s X-1 bantamweight championship will be up for grabs when he faces Van Oscar Penovaroff. The fight card is rounded out with six state title fights, and one amateur championship tilt.

This electrifying event will take place Saturday, March 12th at Blaisdell Arena in Honolulu. Doors for the event wil open at 6 PM, and fights will start at 7 PM. Tickets for this incredible event are on sale through the Blaisdell Box Office, as well as all Wal-Mart stores, as well Tickemaster.com, or by calling (800) 745-3000. In addition, “Champions III” will be available worldwide via pay per view on X1Events.com. The price to purchase the card via PPV will be announced shortly.

Falaniko Vitale (28-9, eight TKO/KO’s, sixteen submissions) is one of the most respected Hawaiian combatants fighting today. An experienced athlete who recently celebrated ten years as a professional fighter, Vitale proudly represents the 808 Fight Factory, one of the toughest fight gyms on the Islands, and has fought for some of the most well-known promotions in the world. Fans of King of the Cage, Rage in the Cage, SuperBrawl, Icon Sport, the IFL, Strikeforce, and the UFC have all seen his skill set exhibited. In his most recent bout, he defended his coveted X-1 strap against former EliteXC slugger Kala “Kolohe” Hose, finishing his ultra-tough opponent via submission in the 4th round this past September. Niko, as he is known, has taken on top names in the sport, including “Ruthless” Robbie Lawler, former Strikeforce middleweight title challenger Jason “Mayhem” Miller, MMA pioneer Jeremy Horn, Strikeforce/UFC veteran Trevor Prangley, and former UFC fighter Frank Trigg. He has beaten notable fighters such as UFC vet Aaron Riley, former UFC Middleweight Champion Dave Menne, UFC middleweight contender Yushin Okami, and Matt “The Law” Lindland.

Dylan Clay (8-2, two TKO/KO’s, six submissions) is a highly-respected submission fighter who possesses six tapout victories on his record. A rather unique individual, Clay is a bit of an MMA nomad. He has trained all over the world, from Thailand, to the mainland, to the Islands. He defeated UFC veteran Ronald “The Machine Gun” Juhn via TKO (corner stoppage) in his first X-1 appearance, which took place in May of 2008. Clay has also competed in M-1, where he faced Brazilian fighter Eduardo Pamplona. He always puts on a show for the fans, and always leaves them satisfied. In Clay’s last bout, he blasted Island boy Brandon Wolff, coaxing a 3rd round tapout from the then-champion. Clay showed a well-rounded game, hurting Brandon on the feet before finishing on the mat. This highly-anticipated scrap will determine middleweight supremacy in X-1.

“What an incredible fight card ‘Champions III’ is shaping up to be,” exclaimed Mike Miller, Owner/Promoter of X-1 World Events. “With fighters like Niko Vitale, Dylan Clay, Harris Sarmiento, and everyone else, the fans are sure to get their money’s worth!”