Strikeforce and IFL veteran Harris Sarmiento talks about his X-1 lightweight title defense on March 12, his most memorable fights, and his hopes to get another shot at the big show. 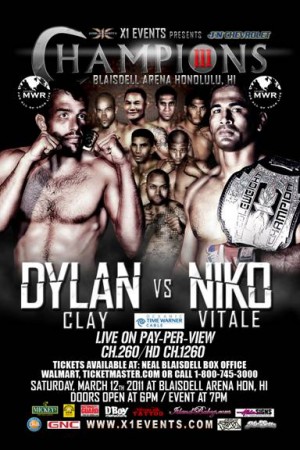 Middleweight and welterweight title-holders to collide in main event Honolulu, HI (USA): Top Hawaiian fight promotion X-1 World Events is back, and its bringing the heavy artillery. “Champions III” will feature an all championship title fight card, with all the local favorites defending their titles. In the main event, X-1 Middleweight Champion Falaniko Vitale will … Read more

In Honolulu, Hawaii today during the Destiny Pier Fighter 1 Press Conference at the Aloha Tower, former Icon Sport promoter Patrick Freitas announced that Kala Kolohe Hose would not be fighting in the scheduled main event on Saturday due to a contract issue and leg injury.

After receiving this news, Destiny promoters decided to replace Hose with MMAHawaii’s Top 10 #1 ranked and undefeated, Dylan Clay from Maui. This fight is now official according to MMAHawaii.

Kalib Starnes went to his press conference today for his scheduled bout with Kala “Kolohe” Hose on Saturday at Destiny’s Pier Fighter 1 in Hawaii.

However, there was someone notably missing from the event; namely, his opponent Icon Middleweight Champ, Kala Hose.

A representative for Hose did attend in his stead and offered several excuses for his fighter’s absence.