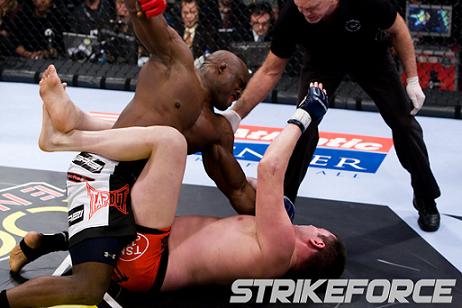 It turns out that Bobby Lashley will not give up on MMA. The former professional wrestling star will face James Jack at Titan FC 7. The card takes place on March 25 at Memoiral Hall in Kansas City, Kan.

In his last fight, Lashley suffered the first MMA defeat of his career. After the wrestler dominated most of the fight with takedowns, Chad Griggs took advantage of the stand up and landed a devastating series of strikes and hammerfists that forced Lashley to retire between the second and third round.

Lashley began his MMA career with five-straight victories. He holds wins over UFC veterans Jason Guida and Wes Sims and also finished Bob Sapp in the first round.

Before entering the professional wrestling world, Lashley competed extensively in the real version of the sport. At Missouri Valley College, Lashley was a four-time NAIA All-American and a three-time champion. After college, Lashley continued to compete for the U.S. Army and took a silver medal at the CISM World Military Championships.

Jack began fighting professionally in 2008. He will bring a 5-4-1 record into the cage. In 2008, he fought twice for the M-1 Challenge and dropped both bouts to Malick N’diaye and Kirill “Baby Fedor” Sidelnikov.

The main card of Titan FC 17 will air live on HDNet. Also on the card, Phil Baroni will take on Nick Nolte.