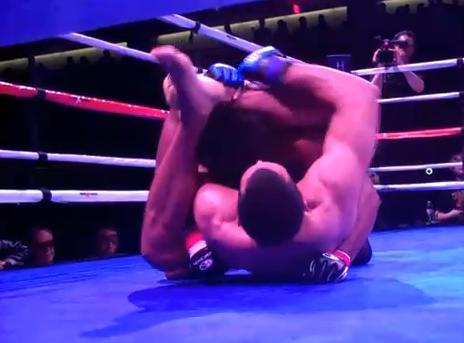 UFC veteran Vinny Magalhaes (6-5) improved to 4-1 since his release from Zuffa, with a Jan. 29 submission win over fellow light heavyweight Damien Knight (3-1-1; a.k.a. Robert Scott) at MMA Xplosion in Las Vegas.

As you might expect from a Brazilian Jiu Jitsu black belt and world champion, Magalhaes showed a ton of skill on the ground and didn’t have much of a problem getting the fight to the mat. Knight came in with a punching combo to start the action, which Magalhaes avoided. He then tied Knight up with an overhook and executed a slick inside trip/throw that brought Knight down.

With Knight turtled up on his knees, Vinny quickly transitioned and took his back, sinking a hook in and looking for an armbar. To his credit, Knight managed to work his arm free and tried to pass Magalhaes guard to side control. But Magalhaes secured his full guard and went to work, immediately isolating one of Knight’s arms and working hard for a triangle choke finish.

That ended up being the story of the fight, with Magalhaes tying up Knight in his full guard and looking for submissions. Although Knight escaped multiple attempts, Magalhaes was always one step ahead on the ground.

In round two, Magalhaes pulled guard and worked a tight rubber guard while swining his other leg over Knight’s free arm and leaving Knight with only his fist on the inside of Magalhaes’s thigh to prevent another triangle attempt. From there, Knight pulled his head out but Magalhaes switched to an omoplata attempt.

As the ground battle continued, Magalhaes took Knight’s back and softened him up with some ground and pound. Magalhaes then attacked an arm and transitioned to a kimura attempt after Knight spun to avoid an armbar. With his guard high and tight, the kimura finally forced Knight to tap at the 3:51 mark of the second round.

Magalhaes rose to prominence after reaching the finals of The Ultimate Fighter 8, where he lost by first round knockout to Ryan Bader. He lost in his only other UFC appearance via decision to Eliot Marshall at UFC 97. Since then, he’s beaten fellow UFC vet Mike Nickels and M-1 fighter Alihan Magomedov.

You can check out the full fight video below.