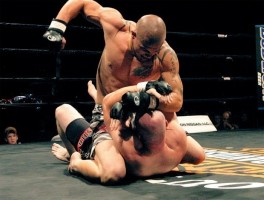 The holiday season is upon us and soon we’ll be ushering in yet another year – 2011, one year closer to our ultimate destruction in 2012 (if you like John Cusack movies).

While major sports were still all the rage in ’10, even seeing professional boxing on an upswing, mixed martial arts, by and large, remained the underdog of the sporting scene. However, the sport is surging in the right direction, gaining momentum with every great fight, and 2011 promises to be just as large and in charge as 2010.

One thing in MMA’s corner keeping it vastly more interesting than other sports is that it’s hard to remain dominant when you’re standing toe-to-toe with an opponent bereft of pads, helmets and/or pillows on your fists. In other words, the BMFs (baddest mo-fos) fall and give rise to new story lines within the sport.

The proverbial underdog, as Rockyesque as you can imagine in cases, is able to step into the octagon and defeat world-class competition in true gladiator fashion. Try as you might, this isn’t something you regularly find in other sports.

Take Frankie Edgar over B.J. Penn as an example. Edgar must have been playing some type of heavenly online slot machines, because he was able to outwork a true legend and hit triple 7s with a decision win. Huge upset, vastly entertaining to watch, and now we have two year’s worth of revenge and redemption stories.

Similarly, Fedor Emelianenko, unbeaten over a nine-year, 27-fight stretch, was obliterated in 69 seconds via triangle choke at the will of a ramped-up Fabricio Werdum. Nowhere else do you find action so intense and a noted script so easily flipped.

And the butt-kickin’ heard ‘round the world – a highly evolved, bigger (in spirit), meaner and nastier Cain Velasquez handed Brock Lesnar a beat-down that time will never erase. Cain went old-school baptism style on Brocky Boy and reigned down blows like he was exorcising demons.

Heavyweights aren’t exactly leaps and bounds above other MMA fighters like in boxing. But, inevitably, everyone pays attention when giants collide, and UFC’s new Heavyweight Champion truly shocked the world.

Three giants in the ring, three crushing and unexpected defeats – and these are only a few examples of 2010’s action. 2011, with defeated fighters looking to regain their glory while the victorious look to retain it, will be equally exciting.

The odds of MMA, UFC in particular, having its best year in 2011 are solid – better than you’ll find with any game at top 10 online casinos or probably even with any other sport. We’re witnessing the natural evolution of modern day gladiatorial art, and it’s quickly reaching a peak.

The best part: the peak knows no height; it can stretch to infinity and beyond, and we’ll love every second of it.