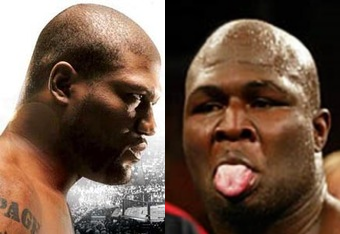 If you thought you had seen the last of boxing legend James “Lights Out” Toney in MMA, you are not alone. After UFC Hall-of-Famer Randy “The Natural” Couture used his wrestling skill to take Toney out of his boxing game, put him on his back and choke him out at UFC 118 back in August, the MMA world was reminded why a fighter with only one weapon, no matter how masterful he is with it, can not survive in the world of mixed martial arts.

But what if an MMA fighter decided to stand and box with James Toney? That is exactly what Quinton “Rampage” Jackson said he would do if he and Toney faced off inside the Octagon. On Friday’s episode of “Inside MMA” on HDNet, Jackson said,

“I want to fight James Toney, he’s been talking a lot of crap about me. I’m not going to fight him the way Randy Couture fought him. I’m gonna fight him. I think I could stand up. I like to take chances. … That’s who I would like to fight because he kind of pulled something. I thought we was cool, then he kind of pulled something I thought was really disrespectful. Then he was talking smack saying I couldn’t sell tickets in his home town of Detroit, and I haven’t said anything to him. So I just want to knock him out.”

Upon hearing Rampage would not only like to fight him, but would like to keep the fight standing, Toney fired back in a statement published by FightHype.com,

“The only thing that the Fake Mr. T has to do is sign the contract. Rampage is a decent club fighter but if he thinks his club fighting style can match my skills, then he is crazy as hell. … What? Is he mad because I called him an Uncle Tom or because I said Detroit wouldn’t accept him? I will go on record and say he is not dumb enough to stand and trade with me. Machida almost knocked him out, so what do you think I would do to him? I ain’t hard to find; sign the contract. … Rampage is a black redneck. He better stick to hanging with them white boys and keep my name out of his mouth! I ain’t hard to find; sign the contract!”

Following Toney’s one and only professional MMA fight at UFC 118, UFC President Dana White said we would never see Toney back inside the UFC Octagon. He has great respect for Toney as a boxer and all he has achieved within the sport. He also believes that is where Toney needs to stay, in boxing.

However, White has been known to change his mind on occasion and most often it happens when he realizes there is something the fans want. If Rampage vs. Toney is a fight the fans truly want to see, and make enough noise about it, it is quite possible it could happen.

What say you ProMMAnow.com readers? Would you like to see if one of MMA’s hardest punchers and best boxers could stand with one of boxing’s best? Sound off in the comments section with your thoughts.