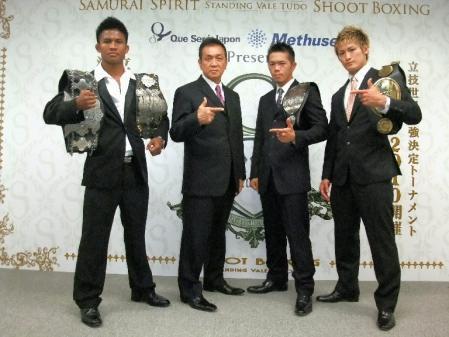 For the second time in his fighting career, Toby Imada has made a surprising run in a tournament. Imada entered the 2010 S-Cup as an injury replacement for Charles “Krazy Horse” Bennet, and he reached the finals before falling to Buakaw Por. Pramuk.

Shoot Boxing is a sport that combines kickboxing, standing submissions and point-scoring throws and takedowns.

In the first round, Imada faced off against Shoot Boxing super welterweight champion Takaaki Umeno. The Shoot Boxing veteran seemed to have the fight in hand, but Imada scored a shocking knockout late in the final round.

Pramuk reached the finals with back-to-back decision victories over Hiroki Shishido and Henri van Opstal. The two-time K-1 MAX champion picked up where he left off against Imada and finished the fight by TKO in the second round.