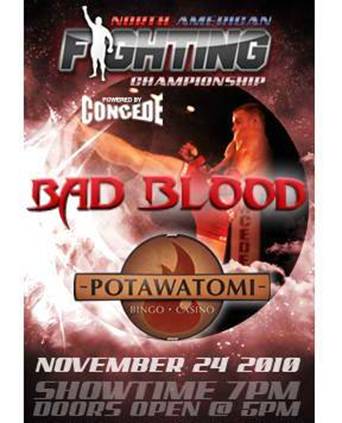 Hated Rivals Face Off In Main and Co-Main Events

“Bad Blood’s” main event features Kenosha, Wisconsin’s WEC veteran Sherron “Rob Roy” Leggett, also known as the “The TapouT Superhero,” who will tangle with James “The Unbreakable Heavy Hitter” Warfield, a veteran of King of the Cage and Shine Fights, and a resident of Madison, Wisconsin. These two established veterans have made it known that they do not like each other, and will definitely be looking to settle their differences in the cage.

Sherron “Rob Roy” Leggett (19-5) is one of the most well-rounded fighters competing out of Wisconsin today. The pride of Kenosha, Leggett is a fighter who is able to excel no matter where the fight goes. “The TapouT Superhero” has carved out a reputation for himself as an exciting fighter who always leaves it all in the cage.

Holding a 15-2 record in his last seventeen bouts, “Rob Roy” has gone down in defeat only to the very best during that span, namely current WEC Lightweight title challenger Anthony Pettis, and former WEC Lightweight Champion Jamie Varner. At the same time, he’s defeated current UFC fighter Nik Lentz, ultra-tough Ryan Bixler, and, in his WEC appearance, he TKO’d Charlie Kohler, all during his latest winning spree. Now, this former star of the TapouT reality television show will look to break “The Unbreakable Heavy Hitter” any way he can at “BAD BLOOD.”

James “The Unbreakable Heavy Hitter” Warfield (21-7) is, by definition, a finisher. In 28 pro fights, he has gone the distance only three times, and every one of his victories has come via stoppage. A veteran of multiple fight organizations, Warfield’s most high-profile fight to date is a loss to UFC, PRIDE, EliteXC and Strikeforce veteran Yves Edwards, who submitted him with a triangle choke at a Shine Fights event in September of 2009.

Warfield has also faced former Ultimate Fighter competitor Seth Baczynski, as well as UFC veteran Rory Markham. Training out of Sun Prairie, Wisconsin’s Chosen Few Fight Team with trainers Pat O’Malley, UFC veteran Ron Faircloth and Kain Rizzo, Warfield is coming off his first loss in five fights, as he competed in the Shine Fights Grand Prix this past September, going down in defeat by split decision to Kyle Baker. Yet, with fifteen of his wins coming by knockout, Warfield is not someone to be taken lightly. When “The Unbreakable Heavy Hitter” and “Rob Roy” meet in the center of the cage, it’s going to produce only one thing: “BAD BLOOD!!”

Jameel “The Real Deal” Massouh (24-7), who fights out of Milwaukee, Wisconsin, has fought some of the best Featherweights in the world. During his run in the WEC, Massouh faced top-flight competition in Raphael Assuncao, Leonard Garcia and Eric Koch. None of the three was able to finish “The Real Deal,” as Massouh lost all three fights by decision.

A strong finisher in his own right, Massouh has defeated Strikeforce veteran Dustin Neace twice and WEC/Strikeforce veteran Ryan Healy during the course of his career. Coming off a submission win victory over Nick Mamalis in his Bellator debut in September, “The Real Deal” is ready to add “King” Camus to his list of victims.

Chico “King” Camus (7-1) is a fast-rising prospect fighting out of Milwaukee’s famed Roufusport Fight Club and is coached by legendary striking and Muay Thai trainer Duke Roufus. Undefeated in the NAFC at 2-0 with two exciting TKO stoppages to his credit, Camus has shown he is equally adept with his strikes as he is with his submissions.

Currently on a six-fight win streak, which includes a victory over former WEC Featherweight title challenger Joe “The Triangular Strangler” Pearson at NAFC’s “STAND YOUR GROUND” in April of this year, “King” is ready to show the MMA world who rules. Next up for the Roufusport product: “The Real Deal.” These two were originally supposed to face off at a Bellator card. Unfortunately, Camus suffered an injury, forcing him off the card. Massouh took the opportunity to question Camus’ sincerity, claiming he simply didn’t want to face “The Real Deal.” Now these two can finally settle score once and for all in the cage at “BAD BLOOD!”