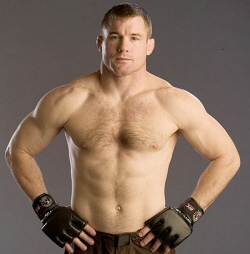 Former UFC two-division champion B.J. Penn is coming off of back-to-back losses to Frankie Edgar, now the 155-pound kingpin, heading into a welterweight rubbermatch against fellow legend Matt Hughes. Both men jumped at the opportunity to square off one more time, and Hughes admits that Penn is probably much more comfortable matching up with him, stylistically, than Edgar.

“I’m not Frankie Edgar, I don’t move around like Frankie Edgar,” Hughes said during a media call to discuss UFC 123, which will take place on Nov. 20 in Detroit. “So I’m sure B.J. is liking this fight style wise.”

Having recently defeated Ricardo Almeida at UFC 117, Hughes planned on taking some time off to be with his family and go hunting, but couldn’t resist when UFC President Dana White offered a rubber match with Penn.

“When [Dana] comes with the name BJ…I kind of felt like I needed to take the fight,” Hughes said.

It was actually Penn, moving up from lightweight for the first time, that derailed Hughes’s long title run at UFC 46 back in 2004. Hughes returned the favor a couple of years later at UFC 63 in a fight where Penn started strong but faded late, allowing Hughes to score a TKO win in the third round.

As decorated and influential as both men have been in the sport, Hughes appears to recognize the importance this trilogy will have on his legacy.

But at this point in his career, Hughes is just enjoying his time competing as a mixed martial artist. If another run at the title presents itself, so be it, but he isn’t preoccupied with winning UFC gold.

“It’s kind of whatever they offer,” Hughes said about what his goals are at this point in his career. “I’m kind of concentrating on having a good time.

“I’m set. I’ve never been a guy to chase the record books. I really don’t care to hold any more records. I’m just ready to go out and have a good time…I still love to compete.”