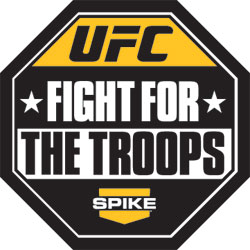 This special live UFC fight card will raise funds for the brave men and women in the United States Armed Forces with traumatic brain injuries. Information about ways to donate can be found online at www.fightforthetroops.com, along with UFC.com and Spike.com.

Spike TV and the UFC are partnering with the Intrepid Fallen Heroes Fund for the special event.  This is the second “Fight for the Troops” show, the first taking place in Fayetteville, North Carolina in December 2008 that raised over 4 million dollars. The Intrepid Fallen Heroes Fund (IFHF) provides assistance to our nation’s military heroes who have been critically injured in the performance of their duty, and their families

“It’s always a great honor for us to entertain the men and women of the military by bringing them some great fights while raising money for the Intrepid Fallen Heroes Fund,” UFC President Dana White said. “It’s the least we can do for the people who are defending this country and making so many sacrifices for our freedom, and this is a cause the UFC will always support.”

“Spike TV is proud to partner with the UFC and the Intrepid Fallen Heroes Fund to support and assist these real American heroes,” said Kevin Kay, president, Spike TV.

“We’re thrilled to be the beneficiary of the generosity of Spike TV and the UFC. Their fans have always supported our troops and we thank them for their unwavering commitment to what we do to help our brave men and women in uniform and their families” said Richard Santulli, Chairman, Intrepid Fallen Heroes Fund

“The Ultimate Fighter 1” finalist and lightweight contender Kenny Florian (15-5) is on a quest for another shot at the coveted 155lb championship belt.  Winner of two of his last three bouts, both by submission over Clay Guida and Takanori Gomi, the popular Massachusetts veteran is looking to battle his way into the title picture, and he needs a victory over rising star Dunham to continue on that path.

Fighting out of Las Vegas with Xtreme Couture, Evan Dunham (11-1) won his first 11 pro fights including eye-opening victories over Efrain Escudero (winning “Fight of the Night” honors) in January 2010 and Tyson Griffin at UFC 115 this past June.  And despite a UFC 119 loss to Sean Sherk, Dunham’s performance and the controversial nature of the split verdict guaranteed that his stock only rose in that’s evening’s “Fight of the Night”.

Mike Swick (14-4), a native of Houston Texas, currently fighting out of San Jose, CA with American Kickboxing Academy, has won four of his six UFC fights at welterweight, and is geared up for a big return to action in January.  The charismatic “The Ultimate Fighter 1” standout takes on David Mitchell (11-1) from Berkley, CA.  Mitchell is looking to follow up with another exciting performance like the one he delivered in his UFC debut against TJ Waldburger in September.

Undefeated heavyweight Matt “Meathead” Mitrione (3-0), an alumnus of “The Ultimate Fighter 10,” is looking to continue his ascension up the UFC heavyweight ranks against Tim Hague.  Mitrione is a former defensive lineman for the New York Giants and Minnesota Vikings, and he most recently won “Fight of the Night” honors in his victory over Joey Beltran at UFC 119 in September.  His opponent, Hague (12-4), is a Canadian slugger riding a two-fight winning streak.

Fighting in front of his fellow soldiers, U.S Army and National Guard vet DaMarques Johnson (16-8), who was a finalist of “The Ultimate Fighter 9,” takes on Mike Guymon (12-4) in a welterweight contest.  Johnson, fighting out of Sandy, Utah, defeated Brad Blackburn at UFC 112 in April via TKO winning “Knockout of the Night” honors. Guymon, fighting out of Lake Forest, CA, has won six of his last eight pro bouts.

“The Ultimate Fighter 2” alum Melvin Guillard (44-9-3, 1 NC), training out of Albuquerque, New Mexico with the famed Jackson’s MMA team, has won six of his last seven fights in the Octagon, rising up the ranks of the UFC’s 155 lb division.  His opponent is Yves Edwards (39-16-1), fighting out of Austin, Texas, and one of the UFC’s most battle-tested veterans. Edwards, who made his UFC debut at UFC 33 in September 28, 2001 against Matt Serra, most recently defeated John Gunderson via decision in September.

More fights to be announced shortly.

Spike TV is available in 98.6 million homes and is a division of MTV Networks.  A unit of Viacom (NYSE: VIA, VIA.B), MTV Networks is one of the world’s leading creators of programming and content across all media platforms. Spike TV’s Internet address is www.spike.com and for up-to-the-minute and archival press information and photographs, visit Spike TV’s press site at www.spike.com/press