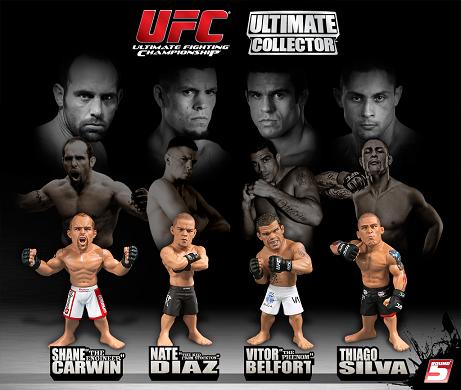 Four new UFC fighters have been added to the Round 5 family. Vitor Belfort, Shane Carwin, Nate Diaz and Thiago Silva action figures will be released in early 2011 as part of Round 5’s “Ultimate Collector” series.

Round 5 will also include surprise “chase” items in this series which has been popular with past releases. “Chase” items include special accessories or variants hidden in a limited number of random packages.

Round 5 President Damon Lau commented on the new new release:

“Our first Series of 2011 has four fighters who have been requested often by fans, and who are all new to Round 5. Collectors have enjoyed finding the ‘chase’ items in previous Series, so we’re excited to continue that with these new figures.”

A list of retailers for UCS 5 and all Round 5 products can be found at www.Round5MMA.com.