Round 5 President Damon Lau announces the release of the Ultimate Collector Series 9 featuring brand new fighters to the Round 5 collection, including two PRIDE tributes, and a Championship Edition available today. 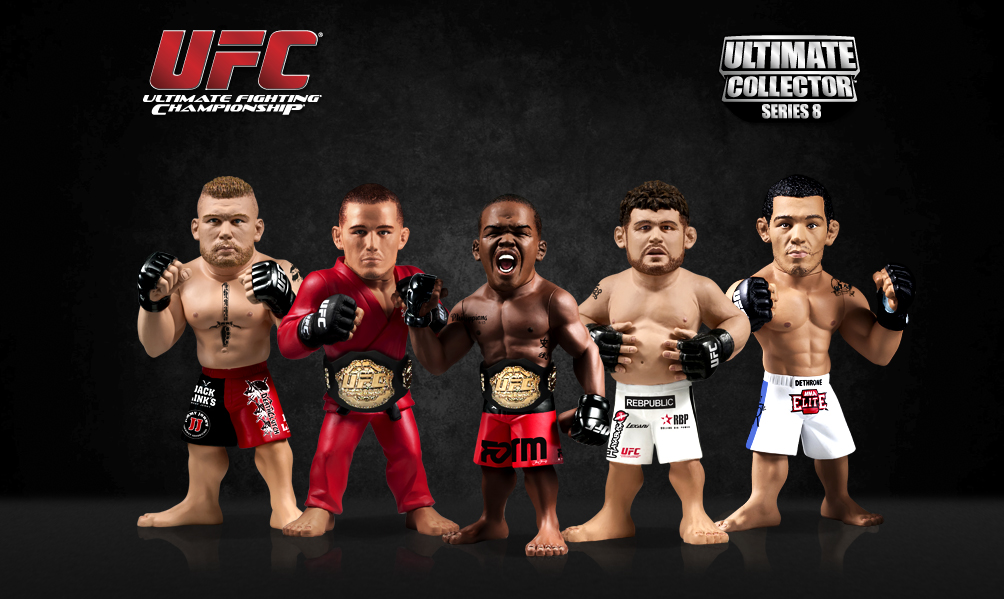 Round 5 President Damon Lau, announces the release of the “Ultimate Collector” Series 8 featuring updated versions of some of the UFC’s most popular fighters

Four new UFC fighters have been added to the Round 5 family. Vitor Belfort, Shane Carwin, Nate Diaz and Thiago Silva figures will be released in 2011 as part of Round 5’s “Ultimate Collector” series.

Round 5 has taken the next step forward in its offering of UFC collectibles with today’s introduction of “UFC Live” Series 1, featuring all-time UFC greats Randy Couture and Chuck Liddell from their historic UFC 43: Meltdown bout.

Velazquez, Buffer, Shogun, Jackson Also Highlighted; Regular And Limited Editions On Display At Booth No. 2524 At Expo, August 27-28 MARKHAM, Ontario, Canada, August 16, 2010 – The past, present and future of the UFC, in and out of the cage, will be on display – literally – as attendees of UFC® Fan Expo™, August … Read more

MARKHAM, Ontario, Canada, July 12, 2010 – Round 5, a leader in producing mixed martial arts collectible figurines, today released images of several prototypes of its “Versus” line, pairs of distinctly new figures highlighting battle scenes from great UFC matchups. The prototypes were first seen at the Round 5 booth at the UFC Fan Expo … Read more

The collectibles are scheduled to be available at other retail outlets and at www.Round5MMA.com early in 2010.

MARKHAM, Ontario, Canada, September 29, 2009 – Its landmark marketing partnership freshly in place, Round 5 is pleased to announce the members of the first series of collectible figurines under the UFC brand, a group of six accomplished fighters, as announced today by Barron Lau, Round 5 CEO and co-founder and Damon Lau, president and co-founder.  Figurines for stars Chuck “The Iceman” Liddell, Georges “Rush” St. Pierre, “Suga” Rashad Evans, Kenny “KenFlo” Florian, Clay “The Carpenter” Guida and Lyoto “The Dragon” Machida are scheduled to be available at retail and at www.Round5MMA.com early next year.

37-year-old Strikeforce Middleweight Champion Cung Le is a man of many talents. Prior to entering the MMA cage, Cung was a Sanshou kickboxing champion with a professional record of 17-0. He also holds a 3-0 record in K-1. The guy has won more championships than most can count.

Using sidekicks for jabs and legs as fast as most fighters’ arms, Cung may very well have the best kicks in MMA. Combine that with very good boxing and a strong wrestling base, and what you have is a legitimate threat to any top ten middleweight.

PRO MMA (promma.info) caught up with Cung recently to talk about his defeat of Frank Shamrock for the Strikeforce Middleweight Title, his addition to the Round 5 action figure collection, his recent acting gigs, and when we might get to see him back in action.