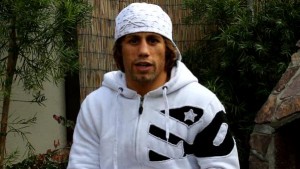 Former WEC featherweight champion Urijah Faber is one person that is happy the UFC and WEC are merging because he will no longer have to explain to people he is not in the UFC. He says it will lead to “bigger opportunities, more exposure and less misunderstanding.” Faber said he loved the WEC, but “just because it was part of the UFC” and he looks forward to fighting for the UFC title in the future.

First things first though; Faber has to deal with Takeya Mizugaki on Nov. 11 at the Palms in Las Vegas when the two headline WEC 52. After that, there will be one final World Extreme Cagefighting card, “WEC 53: Henderson vs. Pettis” on Dec. 16. It’s a little sad to see it go, but it’s a very necessary step in the evolution of the sport.