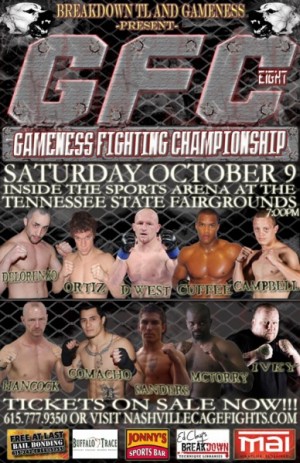 NASHVILLE, Tenn. – Nashville fight fans are in for a treat this Saturday night as Gameness Fighting Championship VIII (GFC 8) comes to the Tennessee State Fairgrounds Sports Arena.  With 10 professional MMA bouts and 10 amateur bouts on the card, the night should be one to remember.

Making his sixth professional appearance, undefeated Nashville MMA fighter and Strikeforce veteran Dustin Ortiz returns to action against one of Kentucky’s top bantamweights, Cory Alexander. Ortiz will be looking to add another casualty rung on his ladder to the big leagues and a win for Alexander would definitely place a speed bump on Ortiz’s thus far unimpeded journey.

Tennessee’s most famous MMA veteran (still living in the state) is Clarksville’s Johnathan Ivey. The man has leg-locked more opponents than Lindsay Lohan has driven drunk. He’s fought more legends than you’ve heard of and will elbow drop your momma if you leave her unattended too long.

Ivey will be facing Ken Shamrock next weekend, but this weekend he’s going to get a warm-up fight against King of the Cage and Shooto veteran Jonathan Spears. All of Spears’ wins have come via submission and the majority of Ivey’s wins have also come by submission so it should be an interesting match-up.

Also on the card, Strikeforce veteran and ProMMAnow.com’s 2009 Amateur Fighter of the Year, Thomas Campbell returns to action against Nashville’s Lucas Thomas. Campbell is coming off his first professional victory, a first round submission over JR Hines at Hardrock MMA in September, while Lucas Thomas will be looking for his first pro victory.

Nashville MMA welterweight Dustin West will make  his first return to competition since breaking his hand at “Strikeforce: Nashville” back in April. West will face Oklahoma’s Brandon Gaines who is coming off a loss to Bellator’s Chris Lozano earlier this year. This is an important bout for West who is currently 2-2 in pro competition and needs to get over that .50% mark.

ProMMAnow.com broke the news at the beginning of the year that former Olympian, Judo and BJJ black belt, Rhadi Ferguson was making the move to professional MMA. Since that time, and in-between helping train some of the sport’s biggest names, Rhadi won his pro debut in August with a 0:07 (seven second) knockout of Darryell Perry, II at Hybrid Fight Leage.

On Saturday, Rhadi will face Tennessee heavyweight Terry “TJ” Adams, Jr. Adams has had three professional fights and has spent less than a minute-and-a-half inside the cage. In his pro debut he knocked out Gary Johnson in 12 seconds, and most recently, stopped David Miley via strikes in just 41 seconds.

As a striker, Adams will present an interesting challenge to Ferguson, who is known primarily for his vicious ground game. If you have never seen Rhadi Ferguson in action, buy your tickets right now, and get down to the Nashville, Tennessee Fairgrounds this Saturday night! It is a very rare and special occasion when an athlete of Rhadi’s caliber makes the transition into MMA, and major news sources from around the world have taken notice.

Fortunately local Nashville promotion Gameness Fighting Championship has picked up Rhadi for this card and fortunately for Middle Tennessee fight fans, they will get to witness history in the making this Saturday night, Oct. 9, at the Tennessee State Fairgrounds Sports Arena.  The action starts at 7 p.m. CT. Try to get your tickets early because this one is bound to sell out! For ticket info go to www.gamenessfightingchampionships.com.

“The fans can expect some fireworks come Saturday night. We are very happy to host John Ivey in his hometown as John is the most decorated MMA veteran in the state. Not to mention, we have the top two pro 125’s in the state battling head to head for the coveted GFC Flyweight Professional Title along with eight other professional bouts. Also, we have a stacked amateur undercard with some bouts that are guaranteed to shake up the amateur rankings! You will not want to miss this card.”

UPDATE (10-7-10): Johnathan Ivey’s opponent, Jonathan Spears has pulled out of the fight, so this fight has been scratched from the card.