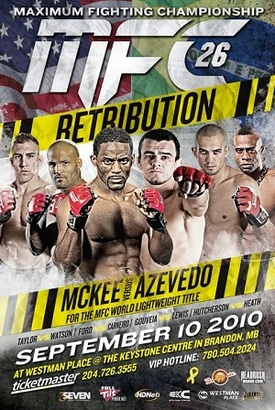 Maximum Fighting Championship returns this evening with “MFC 26: Retribution,” taking place at the River Cree  Resort and Casino in Edmonton, Alberta, Canada. In the main event, Douglas “The Phenom” Lima takes on home-town hero Ryan “The Real Deal” Ford. In the co-main event, MFC lightweight champion Antonio “Mandingo” McKee puts his title and career on the line against Luciano Azevedo.

“MFC 26: Retribution” will broadcast live on HDNet starting at 10 p.m. ET. Stay close to ProMMAnow.com for results and play-by-play commentary on all the action. Our play-by-play won’t be live but will be done following the Shine Fights event, but the quick results are ready.

NOTES: Frank Trigg and Michael Schiavello are handling the commentary tonight. Trigg said if McKee wins this fight it’s going to be a 25 minute boring decision. That kind of talk drives McKee nuts. We’ll see what happens. Just so you know this won’t be a highly detailed play-by-play but I will try to point out the significant stuff.

Round 1 – Demarce is making his MFC debut and walks out to LL Cool J’s “Don’t Call it a Comeback”. Steele is undefeated at 6-0. Demarce dropped Steele with a huge right hand. It rocked him hard. But Steele actually reversed him as Demarce tried to capitalize and ends up on top of Demarce. Demarce gets to his feet, Steele takes him down with a single. Steele puts several elbows in Demarce’s thigh. Demarce gets to his feet before the end of the round and lands a couple punches. Demarce got that round 10-9 in my opinion.

Round 2 – Steele gets a takedown but can’t hold it. Demarce locks on a guillotine very deep. Steele’s shorts have come all the way off and his butt was up in the air in his underwear. Hilarious. He stops and gets out of guard and pulls them up. Ref just looks on, never says a word. Steele on top, gets reversed and they both get up. Steele lands a nice punch and a body kick. Steele just misses with a head kick. Steele walking him down. Steele gets a takedown but Demarce locks up a triangle and taps him out. Beautiful finish from Demarce.

Round 1 – David Heath walks out to “Colors” from ICE-T…. damn… you can’t lose walking out to that. That’s a guarantee win right there. Awesome song. Intense stare down. Time is called due to a low blow then Hutcherson comes out like a maniac and drops Heath with a big big punch. He jumps on Heath inside his full guard. Hutcherson looked like a possessed man. They restart them on the ground in the middle. Heath throws up an armbar attempt as Hutcherson attacks from inside the guard. Hutcherson pulls free and rains down elbows and punches at a frantic pace. Hutcherson staying very busy, not just busy but really trying to do damage. Heath goes for another armbar and eats a big elbow that we can hear. Someone is bleeding badly. They are saying Hutcherson’s nose is broken.

Round 1 – Nickels lands a body kick. Starts chasing after Lewis and eats several uppercuts and he goes down for a few moments in a schamble. Nickels gets back up, swings at Lewis, misses and chases after him and Lewis lands another uppercut and Nickels falls down into the ropes. Lewis follows it up on the ground and the ref finally pulls him off.

Round 1 – JT immediately gets a takedown. Watson gets up bu JT stays on him and puts him back down. He gets up again and uses the ropes to prevent the takedown for the second time. Ref takes a point from Watson. JT with a head kick then a takedown. JT inside Watson’s guard staying busy. Nice elbows from JT.

Round 2 – Takedown from JT, takes Watson’s back, sinks in the choke. Looks tightand JT has both hooks in. Watson’s face is blue. Watson escapes, gets to his feet, and takes Taylor’s back. Taylor reverses and ends up on top in Watson’s guard. Elbows from the bottom by Watson connect. Watson attempts an armbar and Taylor passes guard for a short time before Watson recovers guard. JT not doing any damage and the ref stands them up. Watson swings and JT shoots underneath. JT ends up back on top inside Watson’s guard. JT is controlling the position and putting the fight where he wants it but he did zero damage.

Round 3 – JT with another takedown. They had said Watson would get a title shot if he won. JT said he should get a shot if he wins. JT has Watson’s back. Watson spins and ends up on top, lands a few punches and an elbow. JT is so much the better wrestler and ends up on top again. Watson gives up his back and JT is hanging onto him like a leech. Watson spins and ends up on top of JT. Watson starts landing a few elbows and punches and JT just has his way with him, putting him on his back at will. JT takes his back, Watson ends up on top again. Watson stands up long enough just to get taken right back down. Trigg and Schiavello are yelling at Tom Watson about his poor game plan.

Round 1 – Azevedo doesn’t look at McKee during the face off. Leg kick Azevedo. McKee gets dropped with a kick to the groin as he went for a side kick. Big high slam from McKee, powerful. Azevedo has full guard. McKee staying busy landing some decint shots. Azevedo has a closed guard. McKee reminds me of Sammy Davis Jr. McKee rears up and smashes an enormous elbow into Azevedo’s forehead, it opens up a fountain of blood. Azevedo pokes his head out of the ropes and basically quits, he his hurt badly holding his head, he’s waving it off in a motion of  saying “no more”. A truly remarkable performance from McKee. Remarkable. Antonio says after the fight he’s waiting for UFC to release BJ Penn or Sean Sherk so he can whip their ass. McKee also thanks Guy Mezger from bringing this out of him.

Round 1 – Clinch, Ford has underhooks. They go down and Lima ends up on top. Ford has a half butterfly guard. He sweeps and ends up on top inside Lima’s guard. Lima attempts a triangle and eats a few punches. The crowd cheers “Ryan Ford, Ryan Ford, etc.” Lima has a body triangle from the bottom. He goes for a heel hook but Ford escapes. Ford inside full guard closed. Ford not able to do much damage as Lima is staying very busy. Ford controlled position but did no damage. Guy Mezger gave the round to Lima however, with Ford on top the whole round I would say he got the round 10-9.

Round 2 – Ford swings big then shoots. Lima takes his back. Why Ford wanted to initiate the takedown or clinch I have no idea. Lima transitions to armbar and submits Ryan Ford. Ford taps almost immediately. Ford likely had the striking advantage and should have stuck to standing.