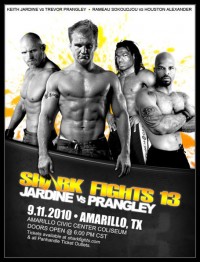 Amarillo, Texas, September 9, 2010 – Shark Fight Promotions announced today that they have partnered with the American Forces Network to deliver “Shark Fights 13: Jardine vs. Prangley” to the men and women of the U.S. armed forces serving overseas. A rebroadcast of the event will air on AFN’s worldwide television network Sunday, September 12. In honor of the lives that were lost on 9/11 and in appreciation of our nation’s military personnel, Shark Fights and award winning production company Crown Chimp Productions, created a special tribute video that will air as part of the pay-per-view and AFN broadcast.

According to Brent Medley, president of Shark Fight Promotions, “Our organization feels that it is important to not only honor those that serve our country, but to give back to them as well. The Shark Fights event on September 11th is a great platform to give our soldiers the recognition that they deserve.”

Medley went on to say, “We are proud to tangibly give back to the families of our soldiers through the Freedom Alliance Scholarship Fund. We also hope that the special tribute video shows our troops that the sacrifices they make for our freedom are truly appreciated. Through our partnership with AFN, Shark Fights 13 and the special tribute video will reach our service men and women worldwide.”

Military personnel, Department of Defense civilian employees and their families stationed in 175 countries and territories from Afghanistan to Zimbabwe, and those aboard 140 U.S. Navy ships at sea, will be able to watch the “Shark Fights 13: Jardine vs. Prangley” pay-per-view rebroadcast free of charge. Thousands of troops will be treated to a fight card loaded with marquee fighters, including promotional champion Trevor Prangley, UFC veteran Keith Jardine, judo champion Rameau Thierry Sokoudjou, Nebraskan striker Houston Alexander, and many more!

“AFN is delighted with the opportunity to present this amazing event to the men and women who serve our country overseas and we are grateful to Shark Fight Promotions for their generosity and support,” Said Larry Marotta, AFN Director of Television.

On September 11, fans can log on to Sherdog.com at 8:00 p.m. ET to catch the live “Shark Fights 13: Jardine vs. Prangley” undercard action. The main card is available on pay-per-view for just $29.99! The initial pay-per-view will air live on iN DEMAND, AVAIL-TVN, Dish Network, Bell TV Canada, and Viewers Choice Canada. Contact your cable provider for details. The AFN rebroadcast will air on Sunday, September 12. For additional information on Shark Fight Promotions, please visit www.sharkfights.com.