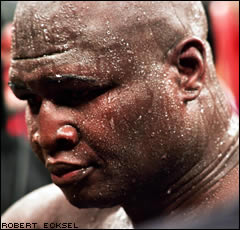 On Sunday we reported that former UFC light heavyweight champion Vitor Belfort made an open plea for UFC President Dana White to let him fight James Toney in a boxing match.

It didn’t take long for Toney to hear about the news, and actually respects Belfort for having the guts and willingness to want to step into his world. Speaking to FightHype, Toney said,

“Tell Vitor Belfort let’s make it happen. I like that because he ain’t no scared little bitch. He wants to come to my world and I’m more than willing to welcome him into my world.”

Belfort has knocked out his last three opponents, most recently dispatching of Rich Franklin in the first round at UFC 103 in September 2009. Belfort has been dealing with an injury since then, but is scheduled to fight Yushin Okami at UFC 122 in November in Germany.

Belfort’s hand speed is legendary. 13 of his 19 wins have come via knockout. But how would he fare against an icon like Toney?

Check out Belfort’s pro boxing debut in the video below. Not only is it a good display of his hand speed, but the video is also a very good example of showing why boxing is much more dangerous than MMA as a sport.

So what do you think, could Vitor Belfort actually defeat James Toney in a pro boxing match?

At first thought, this whole idea of White allowing these two guys to box may seem far-fetched, but sometimes things take on a life of their own. And we’ve also seen, when enough people seem to want something, White often finds a way to make it happen.

Also, if it never happens in the UFC, Belfort could always go make it happen once his contract is up.