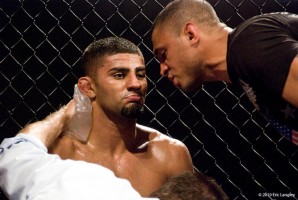 But the Brazilian-born, Atlanta-trained fighter is aiming to change all that with one eye-popping first impression in his organizational debut at MFC 26: Retribution. It certainly won’t be an easy task as Lima, who represents the American Top Team, takes on one of the most popular fighters reared on Canadian soil in Ryan “The Real Deal” Ford, a two-time challenger for the MFC’s welterweight championship.

But “The Phenom” believes that MFC 26 is the perfect occasion for a massive coming-out party.

“I like that the winner of this fight is line for a title shot. Ford has his chance. It’s my time now,” said Lima, who has only let two of his victories get to the judges’ scorecards. Eight of his wins have come via submission with four more coming by way of knockout.

“The MFC is a great organization and I would be honored to get the opportunity for a title fight.”

Lima, who trains and coaches alongside Roan Carnerio at ATT’s Atlanta headquarters, isn’t coming into the Ford fight as a household name or, for that matter, even as a narrow underdog. The native of Goainia, Brazil, is just fine with the fact that the Ford camp didn’t view him as a name enough rival and he doesn’t care that there are many insiders who are predicting that Ford’s recent path of destruction will continue on Sept. 10 in Brandon, Manitoba.

Instead, Lima is inviting the live audience in the Keystone Centre and those watching on HDNet Fights to give him the opportunity to make a name for himself.

“We’ll see what Ford and his people have to say after the fight,” said Lima. “This is a big opportunity for me and I’m going to make the most of it. I’m ready to show the world what I can do.

“I’m not (Pete) Spratt, (LaVerne) Clark or (Tommy) Speer. I am a different fighter than those guys. It doesn’t matter to me who he beat before. I like that people think Ford will have no problem with me. The pressure is all on him.”

Lima certainly does present different – and likely more difficult – challenges than anyone Ford has faced before. He’s more multi-dimensional than those in Ford’s past, and while opponents have never come right out and said it, it didn’t go unnoticed that at least a couple have been intimidated by the Edmonton, Alberta, product’s tough demeanour.

“I train with people tougher, stronger, and bigger than him,” said Lima. “Nothing he will do will intimidate me. I’m a fighter. I won’t back down to anybody. Man, if I get intimidated by looks or how tough somebody is I might as well not fight.”

And Lima is not concerned about what type of fight the encounter with Ford turns out to be. Styles make fights and Lima will take Ford head-on any way he wants.

“Game plans always change. I train everything. The ground is my favorite but I love to keep the fight standing too. Wherever it takes place, I’ll be comfortable. I have been training for a long time, my camp has been great, and I’ll be ready for a stand-up war and to do some good scrambling on the ground.”