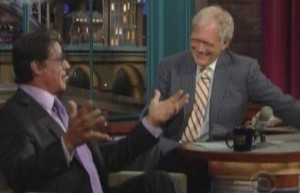 Film legend Sylvester Stallone appeared on a recent episode of “Late Night with David Letterman” to discuss his upcoming film “The Expendables“, starring the biggest names in action movie history. Included among these legendary cinematic tough guys is none other than former UFC light heavyweight and heavyweight champion Randy Couture.

Stallone, who wrote and directed the movie, talks about working with Couture on the set and what a genuine bad ass “The Natural” really is. The genuine respect that Stallone and Letterman show for Couture is most impressive. “The Expendables” is due to hit theaters on Aug. 13.